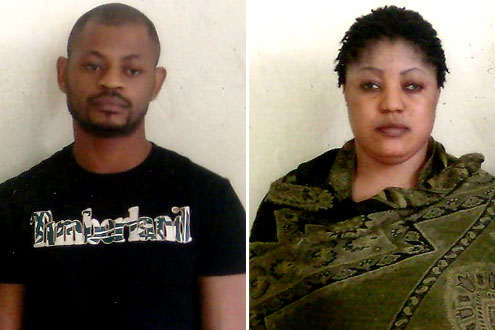 A driver, Victor Sunday Okon, 35, and his girlfriend, Eno Joseph Eyo, 25, are now inmates of Kirikiri Prisons, Apapa, Lagos, Southwest Nigeria, because of their alleged roles in the kidnap of Victorâ€™s boss, Saheed Alao, for a N50 million ransom.

The driver and his girlfriend have been arraigned before an Igbosere magistrateâ€™s court in Lagos on a three-count charge of kidnapping, armed robbery and unlawful imprisonment.

Police prosecutor, ASP Jayeola Oloruntoba, in the charge alleged that Victor and Eno conspired with six others now at large to kidnap Alao at his office in Victoria Island, Lagos recently and collected a ransom of N35 million before releasing the victim.

P.M.NEWS learnt that Victor was introduced to the â€˜businessâ€™ by his girlfriend, Eno who convinced him that his share of the ransom would transform his life.

When Alao was kidnapped and kept incommunicado in Akute area of Ogun State, it was gathered that Victor was also involved with family members in searching for his boss.

When the abductors demanded N50 million ransom, the driver was also part of the negotiation and the family eventually raised the N35 million both parties agreed on. His boss was released at Mowe after his family had paid the ransom.

But the gang leaders gave Victor only N2 million and his girlfriend N1 million out of the N35 million ransom collected. They disappeared with their loot after the successful operation.

Victor and his girlfriend started to enjoy their share and their lives were indeed transformed. Victor bought a space wagon Subaru car with his share of the ransom.

Their joy was, however, short-lived as their neighbours at 25, Olu Olubi Street, Mafoluku, Oshodi, Lagos reported them to the Federal Anti-Robbery Squad, FSARS.

Their neighboursâ€™ suspicion was confirmed when Inspector Banjoko who was detailed by FSARS to investigate the case discovered that the live-in-lovers were allegedly involved in the kidnap of Alao and that their share of the ransom was the source of their new found life of affluence.

Police then arrested and arraigned Victor and Eno before an Igbosere magistratesâ€™ court on a three-count charge of kidnapping, armed robbery and unlawful imprisonment.

The presiding magistrate, G.E. Fabanwo, upheld the application and ordered Victor and Eno to be remanded in prison custody.

He adjourned the matter till 26 September, 2011 for mention.

P.M.NEWS learnt that during interrogation by the police, Victor confessed that his girlfriend who lives with him introduced him to the kidnapping gang through two men called ID and Nsikak.

Victor reportedly told his interrogators: â€œI agreed with her because of greed. They are all from my home state, Calabar in Cross River State.

â€œThey carried out the project perfectly and I even joined my bossâ€™ family to source for the money.

â€œI was surprised that ID and Nsikak came to give me only N2 million and my girlfriend N1 million in my house after which they escaped. All efforts to locate them have proved abortive.

â€œI beg God to forgive me because my boss never treated me badly since he employed me.â€