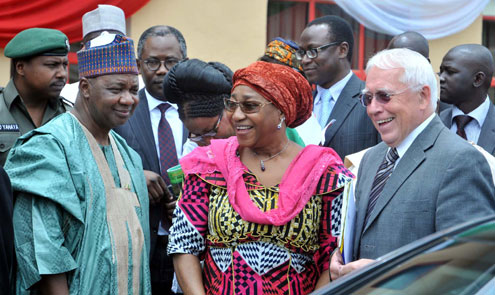 The President, who was represented at the event by Vice President Namadi Sambo, reaffirmed the resolve of the Federal Government in combating the menace of corruption and terrorism.

He reiterated that anti-corruption is a central focus of the transformation agenda of this administration and that the passage and assent of the anti-terrorism Act is a first step in the effort of government to combat the menace of terrorism which is an offshoot of corruption.

The president stated that his administration does not recognise any sacred cow and pledged to assist the anti-corruption agencies to do their work effectively so as to arrest the spate of corruption and terrorist activities.

The president also used the opportunity to charge the anti-corruption agencies to collaborate with the Attorney General of the Federation, Mohammed Bello Adoke, who the Federal Government had designated the central authority to pursue the recovery of looted funds stashed in several “safe havens” across the world.

He congratulated the Chairman of the anti-graft agency, Mrs. Farida Waziri, for the recovery of over 11 billion US dollars proceeds of crime and the convictions it has recorded so far and called on the agency to intensify efforts towards reducing corruption activities within the polity.

While declaring the seminar open, President Jonathan also stated that everybody pays a price for corruption one way or the other.

The President of the Republic of Liberia, Mrs. Helen Johnson Sirleaf delivered the key note address at the opening of the 8th National Seminar on economic crime whose theme is, â€œNational Development: The Challenges of Global Economic Crimeâ€.

The Liberian President illustrated her government’s effort in the restructuring of the economy of the war ravaged country and gave a step by step actions taken to combat the menace of corruption in her country.

Sirleaf applauded the EFCC over the landmark achievement in the war against corruption and sought for autonomy for the anti-graft agency to set it free from interference from executive arm of government as she is currently pursuing a similar anti-corruption agency in Liberia.

The Attorney General and Minister of Justice, Bello Adoke, in a remark at the event reiterated that there is no divided house in the nation’s fight against corruption.

He stated that the Nigerian economy is not insulated from the vagaries of international economy which is affected by acts of terrorism and corruption.

The AGF also informed that his office recently successfully negotiated the return of 26 million US dollars from Jersey which was proceed of crime which originated from Nigeria.

Adoke also stated that a Bribery Act is in the pipeline to support the anti terrorism Act to make every act of corruption a high risk venture.

He also pledged to pursue the granting of autonomy to the Financial Intelligence Unit, NFIU, which is currently a department of the EFCC, in line with global best practices.

Mrs Waziri in her welcome address said that the corruption of a few is causing debilitating hunger and unemployment.

According to Waziri, “entrenched corruption is responsible for the poor state of our nation’s infrastructure and the epileptic power situation we have today. A corruption free Nigeria is a threat to the few corrupt people and explains their desperation to sustain the corrupt system.”

She called on the judiciary to give effect to all the Acts and legislations aimed at combating corruption in the country.

Other dignitaries at the opening session were Governors Babatunde Fashola of Lagos State, Gabriel Suswam of Benue State and Saidu Dakingari of Kebbi State.

Others include Nurudeen Mohammed, minister of state for Foreign Affairs, his counterpart at the Ministry of Works, Bashir Yuguda, Dr. Ahmadu Ali, former PDP National Chairman, David Mcreal, the Head of EU delegation as well as Bolaji Akinyemi, former Minister of Foreign Affairs.

Governor Fashola who spoke on behalf of the governors charged government to tackle such issues that drive people into corruption which he said are pecuniary, like enhanced pay package for workers, more employment opportunities and good infrastructure.

The Head of the EU Delegation in a short address pledged more support to the anti-graft agency which the EU had supported since 2005 to the tune of 6.2 billion Euros.