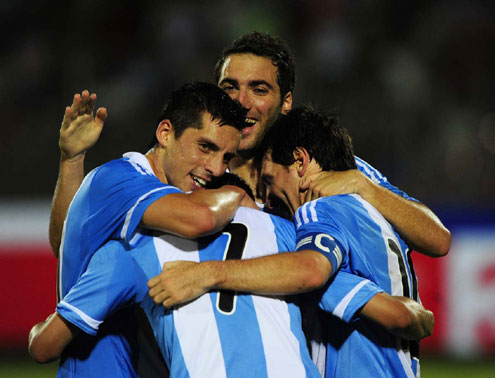 Argentina players celebrate their sweet revenge over the Super Eagles of Nigeria after beating them 3-1 in an international friendly rematch in Dhaka, Bangladesh today. PHOTO: AFP.

He created two of his teamâ€™s goals, while Efe Ambrose put the ball through his own net for the South Americansâ€™ third goal.

The Super Eagles lacked organisation in the midfield and this allowed Argentina to pile pressure directly on a very experimental back four of Elderson Echiejile, Chibuzor Okonkwo, Efe Ambrose and Dele Adeleye.

Argentina controlled the play from the blast of the whistle inside a packed Bangabandhu National Stadium in Dhaka, Bangladesh, as Nigeria preferred to sit back and defend inside their own area.

World Footballer of the Year Messi enjoyed his free role as he was always behind all the good moves by Argentina.

In the 24th minute, Real Madrid striker Gonzalo Higuain controlled a first-time pass by Messi right inside the box before he fired home the opening goal of the rematch.

Two minutes later, Messi robbed Mikel of the ball in the middle of the pitch, before he ghosted past four Nigerian markers. His shot was slowed down by a diving goalkeeper Dele Aiyenugba only for Angel di Maria to easily tap home the rebound for the second goal.

Coach Samson Siasia threw in Ahmed Musa and Chinedu Obasi into the fray for the restart and Nigeria were promptly rewarded three minutes after the break when Obasi fired home off a Mikel cross from the left.

Nigeria went on the back foot boosted by this goal. They were more comfortable on the ball and passed the ball among themselves with confidence.

However, Argentina fought back soon after to get a lucky third goal in the 66th minute.

It was an own goal by Efe Ambrose. Just when it seemed the Eagles defence had shut out Higuain inside the box, the ball came off the body of the Israel-based central defender to give the South Americans a two-goal cushion.