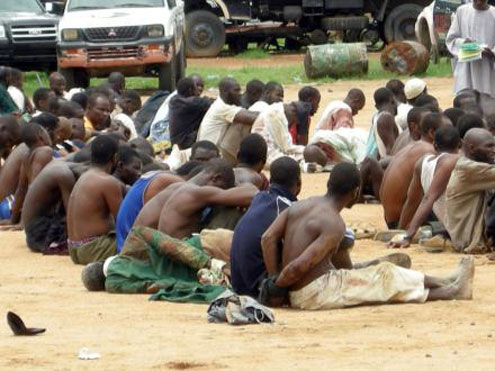 Nigeriaâ€™s intelligence agency, the State Security Services, SSS said this morning that it has arrested an Igbo Boko Haram member in Suleja, a suburb of Abuja, the Federal Capital Territory.

The 31-year old indigene of Imo State, according to the SSS, converted to Islam in 2003.

SSS also said it uncovered a bomb factory owned by the sect. There have been a series of deadly blasts in Suleja in the past few months.

The agency said the factory is where the bombs that have rocked Suleja town and its environs leading to the death of many victims were assembled.

The intelligence agency also said it has arrested six persons in connection with the bomb making factory, according to a statement signed by its Assistant Director, Public Relations, Marilyn Ogar.

The agency also said it has established that some of the arrested men have links with global terrorist group, al-Qaeda.

SSS, however, did not mention the names of the six suspects, but it said in the statement that the suspects were responsible for the bombing of INEC office in Suleja; bombing of All Christian Fellowship Church in Suleja; and the killing of four policemen at Dakwa-Deidei in the FCT.

The Security agency said the six men will soon be charged to court.

SSS said its investigation was sparked off following the bombings at the INEC office, Suleja on 8 April, 2011 and the All Christian Fellowship Church, Suleja, Niger State on 10 July, 2011.

Here is the SSS statement released this afternoon: â€œConsequently, on 4th August, 2011, a suspect who is a Nigerienne national, was apprehended in connection with the bombing incident in Suleja. He confessed to his involvement in the bombings as well as his membership of the Boko Haram sect. His confession led to the arrest of a thirty-one (31) year old indigene of Imo State who converted to Islam in 2003.

â€œThe second suspect, who is born of a Nigerienne mother, was brought up in Niger Republic, where he had his early education. He also admitted to being a member of the Boko Haram sect as well as having worked in concert with a third suspect from Kano State to carry out attacks in Suleja.

â€œThe five (5) suspects all confessed that the main supplier of the explosive materials used for their bombing operations is a miner from Nasarawa State who the Service eventually arrested on 30 August, 2011.

â€œThey also confessed that they took part in the killing of four policemen at a check-point at Dakwa-Deidei in Bwari Area Council of the FCT on 22nd May, 2011.

â€œInvestigation has indeed revealed that the suspects belong to the Boko Haram cell operating in the Suleja-Abuja axis which is under the direction and control of a blood-thirsty Boko Haram leader who is now at large.

â€œMeanwhile, a nondescript building where the Improvised Explosive Devices (I.E.Ds) are assembled has been uncovered at an area popularly known as Chechnya, Hayin-Uku village in Tafa LGA, Niger State.