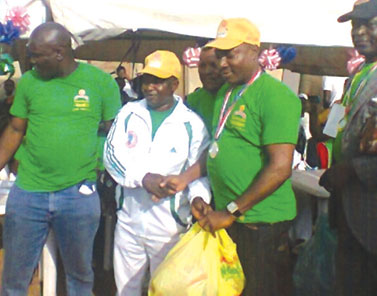 Ade Odeniyi zone, who are the defending champions of the soccer event achieved this feat by defeating Oshin zone 3-1 in a thrilling grand finale.

The third place match between Fakeye/Segilola zone and Ogunleye Ogunaike zone preceded the final. The equally entertaining match was decided via penalties shoot out. The match ended one goal apiece after extra time.

The ensuing penalty kicks finished in favour of the boys from Fakeye Segilola zone, who came back from missing their first two spot kicks to win 3-2.

The table tennis final was also decided on the final day of the Games that saw the emergence of Fakeye/Segilola, Dele Ajayi/Kuye and Oshin Olorunyonusimi zones, as first, second and third place winners respectively.

The Most Valuable Player of the five-week soccer event was James Amoo of Oshin zone, first runner up was Rasheed Ismael of Fakeye/Segilola zone, while the highest goalscorer award went to Femi Aremo of Ogunleye/Ogunaike zone, who scored six goals.

At the Landlordsâ€™ Lucky Dip contest, Professor Leke Oduwaiye of the University of Lagos was the winner of Mouka Foam, while Michael Iroegbu won Engineer Oyetunji’s essay competition.

The final ceremony was graced by dignitaries and representatives of corporate bodies, that were present to identify with the famous annual community championship.