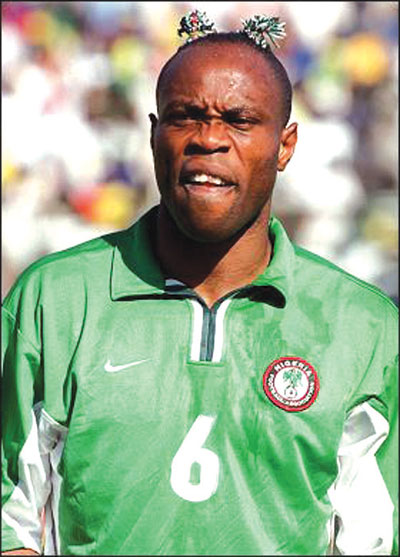 Former Super Eaglesâ€™ defender, Taribo West, has advised football players, both in the professional and amateur cadres, to cultivate the habit of training on beach soccer pitch as a way of keeping fit.

Pastor Taribo, as he is fondly called by his admirers, gave this advice while reacting to the 5-3 victory of the Super Sand Eagles of Nigeria over their Venezuelan counterparts at the ongoing Beach Soccer World Cup in Ravenna, Italy.

Taribo said training on sandy pitch for at least twice in a week helps to build up stamina and endurance, which will help football players immensely when they get on a normal football pitch.

â€œI played beach soccer while I was in Italy so I know what it entails. Training on the sandy beach soccer field will help football players to overcome the rigours and challenges of modern day football.

â€œEven Brazilians players do play on the beach whenever they are in their country for summer holiday to keep fit and strong ahead of the European football leagues,” he said.

The former Inter Milan of Italy defender commended the Super Sand Eagles captained by Isiaka Olawale for their performance at the tournament, saying with more efforts they can surpass their quarter final feat at the last edition.

He also urged the NFF to start making use of ex-players in all departments of the sport just as it is being done in advanced countries.

â€œIt is high time the NFF started bringing in people with ideas to run the game in the country so that our players will be able to catch up with their counterparts in America and Europe.â€