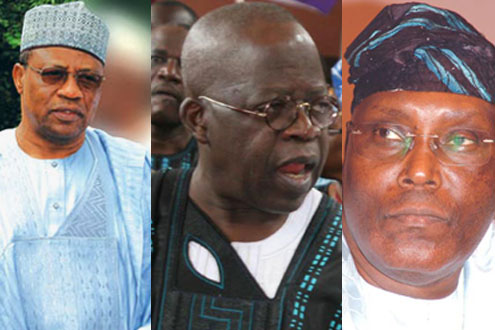 From left: IBB, Tinubu and Atiku.

Wikileaks, the anti-secret website has revealed the extent political office seekers can go to damage one another, in order to achieve their political objective. In one such move, an aide to former military president, Ibrahim Babangida, made allegations before the American Consular General that former Vice President, Alhaji Atiku Abubakar, former Lagos governor, Asiwaju Bola Ahmed Tinubu and even the Odua Peoplesâ€™Congress had links with the terrorist organisation, Al-Qaeda.

The lies were apparently told in order to get Americaâ€™s support for Babangidaâ€™s presidential ambition then. The American Consular noted in the cable dated 13 August 2005 that it should be taken as an effort to damage political opponentsâ€™ reputations. The cable read in part:

Classified By: Consul General Brian Browne for reasons 1.4(b) and (d)

1. (S) Summary. Professor Ukandi Damachi, a long-time Mission contact and close advisor to former head-of-state Ibrahim Babangida, recently told us about a chance encounter he had with pro-Obasanjo members of the Peopleâ€™s Democratic Party (PDP)executive. These partisans alleged an association between Vice President Atiku, Lagos Governor Tinubu and Al-Qaeda. According to Damachi, the PDP members told him the Oodua Peopleâ€™s Congress (OPC), a loose and curious amalgam of some Yoruba politicians, street thugs, and other neâ€™er-do-wells, founded in the late 1990s, had received funding from Al-Qaeda. The PDP official claimed both Vice President Atiku and Lagos Governor Tinubu were involved in this transaction, which was intended to finance the OPC destabilization of southern Nigeria. Damachi maintained the PDP members said President Obasanjo was aware of these events. Vice President Atiku and Governor Tinubu, both in Obasanjoâ€™s doghouse, have been long-time allies and are in ongoing discussions about forming a presidential ticket for the 2007 elections. This information has not/not been corroborated and may be intended to shape USG thinking on Nigeriaâ€™s presidential aspirants. End Summary.

2. (S) Damachi asserted that he encountered senior PDP leaders July 22 at the Murtala Mohammed International Airport in Lagos. The party figures were awaiting the arrival of PDP Chairman Ahmadu Ali and President Obasanjo. Damachi told the Consul General that the PDP officials, including the partyâ€™s vice-chairman for the Southwest, began to discuss this matter openly with him. Then they also raised this issue with party chairman Ali who arrived at the airport before the President. Ali purportedly expressed both his and the Presidentâ€™s awareness of the alleged transaction. Ali, however, terminated this discussion, asserting that the groupsâ€™ top project at the moment was the impending PDP political rally in Lagos. After the rally, they would discuss this sensitive issue.

3. (S) Damachi asserted the PDP officials told him that Atiku and Tinubu were supporting this Al-Qaeda/OPC nexus out of political desperation. Both men would likely have their 2007 national political ambitions dashed by President Obasanjo. In response to this likely predicament, they would attempt to make parts of Nigeria ungovernable, in hopes of crippling

Obasanjo or even forcing his ouster. In the midst of the resultant turmoil, they would be able to revive their ambitions for the Presidency and Vice Presidency.

4. (C) Damachi also heard from his PDP interlocutors that President Obasanjo planned to dump Vice President Atiku in early 2006 on corruption charges and that this alleged Al-Qaeda