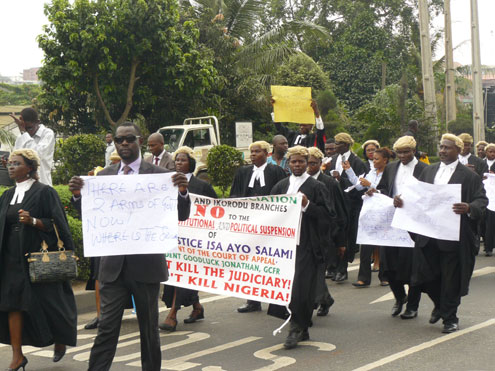 Lawyers protesting against the suspension of Justice Ayo Salami as the President of the Appeal Court this morning at Allen juction, Lagos.Photo Kola Aliyu.

Three branches of the Nigerian Bar Association, NBA, namely Ikorodu, Lagos and Ikeja this morning took to the streets to protest the ratification of Justice Ayo Salamiâ€™s suspension by President Goodluck Jonathan.

Members of the NBA in the three branches numbering over 1,000 marched from Ikeja High Court to Alausa, carrying placards.

In their protest letter signed by the chairmen and secretaries of the three branches and addressed to Jonathan, the NBA condemned the action of the President in ratifying the suspension.

They contended that the action if not reversed may set a very dangerous precedent that will could threaten the existing legal order and rule of law.

The NBA urged the president to immediately reverse the suspension of Salami and await the outcome of the case in court.

As at the time of filing this report, the protesting lawyers were still waiting at the Alausa secretariat, Ikeja, to hand over their protest letter to Lagos State Governor, Babatunde Raji Fashola who will forward it to the President.