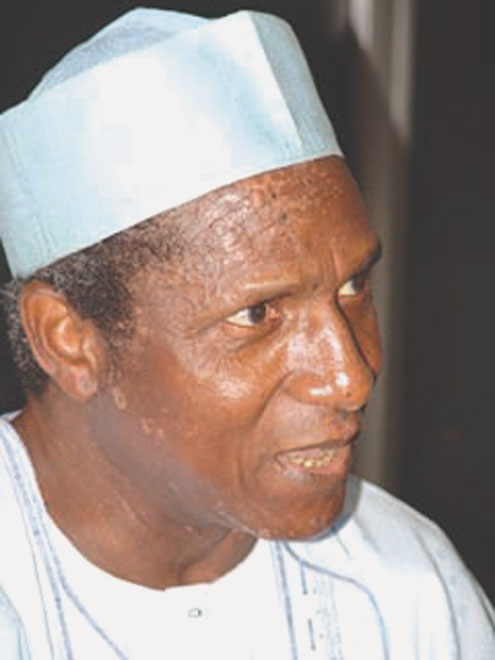 The late Yar'Adua: refused to pay Dokpesi for bogus job

Wikileaks, the whistle blower on the secrets being filed away by governments, has released yet another sensational cable, giving an insight into how Nigeriaâ€™s former leader, Umaru Yarâ€™Adua won his disputed 2007 election at the Election Tribunal.

Isyaku Ibrahim, a member of the PDP Board of Trustees told American diplomats that Yarâ€™Adua instructed the managing director of the Nigerian National Petroleum Corporation to â€œdivert $57 million to bribe the five justices of the Presidential Election Tribunal.â€ The purpose: to induce them to uphold his election.

The cable sent from the American Embassy in Abuja was dated 7 March, 2008, about 11 days after the judges gave the greatly flawed judgement.

The judgement was delivered by Justice John Fabiyi, on behalf of four other members of the panel on 26 February, 2008. One of the remarks made by the panel remains a big puzzle to Nigerians as the verdict negated a conclusion the panel reached on the plethora of malpractices that dogged the April 2007 election.

The panel, which also comprised Justice James Ogebe as chairman, Justice Raphael Agbo, Justice Abdulkadir Jega and Justice Uwani Musa Aba-Aji, said: â€œThe petitioner has, in this case, established substantially the noncompliance with the electoral act.â€ But the panel went further to state, contrarily that: (the petitioner) â€œhas failed to establish the substantiality (effect) of the noncompliance on the results.â€

Justice Idris Kutigi, the Chief Justice of Nigeria, at the time, was quoted in the cable describing the verdict as â€œembarrassing and pathetic.â€

1. (S//NF) SUMMARY: Isyaku Ibrahim (strictly protect), a founding member of the Peopleâ€™s Democratic Party (PDP) and PDP Board of Trustees member, but also a strong critic of the partyâ€™s current ruling group, alleged that President Yarâ€™Adua directed Managing Director of the Nigerian National Petroleum Corporation to divert $57 million to bribe the five justices of the Presidential Election Tribunal to uphold his April 2007 election.

Ibrahim claimed that, as of February 18, three of the panelâ€™s justices were privately signalling an intention to overturn Yarâ€™Aduaâ€™s election, and that Attorney General Michael Aondoakaa (and not the justices) in fact drafted the judgment. Ibrahim also asserted that Supreme Court Chief Justice Idris Kutigi told him February 29 the Supreme Court would rule to overturn Yarâ€™Aduaâ€™s election since it regarded the election as massively rigged and the Tribunalâ€™s judgment â€œembarrassing and pathetic.â€ Ibrahim described the March 8 PDP Convention as a battle of wits between Obasanjo and Yarâ€™Adua, to determine who would emerge as having greater influence within the PDP.

Should Obasanjoâ€™s choice, Sam Egwu, emerge the PDP National Chair, Ibrahim argued, it would indicate not only that the PDP remains firmly within Obasanjoâ€™s grip, but also that Yarâ€™Adua is a â€œnobodyâ€ within the party.

Ibrahim also believed Yarâ€™Adua may possibly choose former Senate President Pius Anyim for National Chair. Ibrahim said Yarâ€™Adua has authorised the disbursement of $3 million to be dispatched across Nigeriaâ€™s six geopolitical zones to forestall the possibility of Egwu emerging the victor. Ibrahim also told PolOff that Yarâ€™Adua had met with PDP governors March 3 and would again meet with them March 7, to pressure them to vote against Egwu.

2. (S//NF) SUMMARY CONTâ€™D: Ibrahim decried Yarâ€™Adua as a â€œruthless, cunningâ€ individual who has done nothing for the Nigerian people since he took office last May. While Ibrahimâ€™s antipathy for Obasanjo is well-known, he averred that Yarâ€™Adua was even more â€œdangerousâ€ and â€œcorruptâ€ than Obasanjo, and suggested that First Lady Turai Yarâ€™Adua, at the possible behest of President Yarâ€™Adua, controlled access to the President and used it to engage in illicit monetary enrichment. Moreover, Ibrahim confided that in mid-January discussions in Paris, he advised former Head of State Ibrahim Babangida to remain outside Nigeria and not attempt a political comeback since he lacked any significant base of support either within the PDP or the military.

3. (S//NF) BIOGRAPHICAL NOTE: Isyaku Ibrahim is the only member of the PDP Board of Trustees who is also a founding member of the party. Representative of the old guard of Nigerian politicians, whose counsel and analysis of Nigerian politics is well-respected and highly sought, he is, nonetheless clearly alienated from the groups currently dominating the party. His insistent calls for greater democracy within the PDP, and public denouncements of Obasanjoâ€™s efforts to the contrary since 2006 have earned him both enmity and praise. Ibrahim speaks frankly against what he perceives as a political class interested only in monetary enrichment and power. Ibrahim served as a member of the Nigerian parliament in the First Republic and supported Shehu Shagariâ€™s ascension to the presidency in 1979. Ibrahim lives a relatively modest lifestyle, and is chair of Nima Manufacturing Industries Ltd. in Abuja. Born in 1938, Ibrahim credits as a great reformer of Nigeria Mallam Aminu Kano.

4. (S//NF) Founding member of the Peopleâ€™s Democratic Party (PDP) and PDP Board of Trustees member Isyaku Ibrahim (strictly protect) spoke with PolOff March 6. Ibrahim claimed that President Yarâ€™Adua instructed the General Managing Director of the Nigerian National Petroleum Corporation (NNPC), Abubakar Yarâ€™Adua, on February 20 to release $57 million from the NNPC to Attorney General Aondoakaa. In turn, Ibrahim noted, Aondoakaa would disburse the funds among the five-justice panel of the Presidential Election Tribunal and the Chiefs of Defence and Army Staff. As of February 18, three of the Tribunalâ€™s justices, A. A. Jega, Agube Igwe, and Uwani Abba-Aji, had declared privately an intention to overturn Yarâ€™Aduaâ€™s election, contending the election was massively rigged and flawed. The hurried February 19 announcement of Presidential Election Tribunal Chair James Ogebeâ€™s nomination to the Supreme Court, Ibrahim asserted, was a â€œcalculated and deliberateâ€ attempt to provide cover for Ogebe. With Ogebeâ€™s nomination pending approval at the Senate, Ibrahim reasoned, Ogebe could excuse himself from the Tribunal and later claim he had nothing to do with the judgment itself. (The Senate confirmed Ogebeâ€™s nomination to the Supreme Court March 6.) As well, Ibrahim alleged the Tribunal judgment had been written by Attorney General Michael Aondoakaa. (Comment: While we have maintained that the provisions of the 2006 Electoral Act necessarily make it difficult for any petitioner to prove that electoral malfeasance â€œsubstantiallyâ€ affected the outcome of elections in 2/3 of Nigeriaâ€™s 36 states, and that that meant a judgment against Yarâ€™Aduaâ€™s election was unlikely, this is the first allegation we have heard of Yarâ€™Adua directly interfering in the Presidential Election Tribunal process. End Comment.)

5. (S//NF) Ibrahim confided that Supreme Court Chief Justice Idris Kutigi told him over a private lunch February 29 that the Supreme Court will overrule the Tribunalâ€™s verdict to uphold Yarâ€™Aduaâ€™s April 2007 election since, according to Kutigi, the Tribunalâ€™s judgment was â€œembarrassing and pathetic.â€ In such an eventuality, Ibrahim stated, the Constitution may be interpreted to suggest that the Senate President would take over as interim president for a period of no more than 90 days. Ibrahim told PolOff that the opposition All Nigeria Peopleâ€™s Party (ANPP) and Action Congress have signalled privately that they will not support this reading of the Constitution, particularly if Obasanjo-loyalist and current Senate President David Markâ€™s (PDP) election is upheld at the Court of Appeal.

6. (S) Note: PolOffs witnessed February 26 at the Presidential Election Tribunal that both Attorney General Aondoakaa and Justice Ogebeâ€™s son Emmanuel Ogebe walked through to chambers to meet with the justices. Under law, however, justices must be sequestered during deliberation and especially prior to delivering a judgment. A Reuters foreign correspondent resident in Abuja told PolOff March 2 that a source inside the Villa had read the judgment verbatim to the correspondent February 25 (a day before the actual ruling was delivered). Political Adviser to General Muhammadu Buhari (ANPP), Muhammad Abba (protect), told PolOff February 28 the General had received information from contacts within the Villa on February 24 that the Tribunal would uphold the election. End Note.

7. (S//NF) Concerning the scheduled March 8 PDP Convention, Ibrahim told PolOff the convention would be a battle between Obasanjo and Yarâ€™Adua to determine who had greater leverage and influence within the party. Should Obasanjoâ€™s choice, Sam Egwu, emerge the PDP National Chair, Ibrahim argued, it would indicate not only that the PDP remains firmly within Obasanjoâ€™s grip, but also that Yarâ€™Adua is a â€œnobodyâ€ within the party. While Obasanjo had â€œblackmailedâ€ several incumbent governors and other PDP stalwarts into supporting his choice for National Chairman, former Ebonyi governor Sam Egwu, Ibrahim claimed Yarâ€™Adua also has been actively campaigning for another candidate, possibly former Senate President Pius Anyim. In concert with Kwara governor Bukola Saraki, Ibrahim said, Yarâ€™Adua has authorised the disbursement of $3 million across Nigeriaâ€™s six geopolitical zones in an effort to secure support against Obasanjoâ€™s choice for national chairman. Ibrahim told PolOff that Yarâ€™Adua had met with PDP governors March 3 and would again meet with them March 7, to pressure them to vote against Obasanjoâ€™s choice. Ibrahim also discredited moves by the so-called G-21 and other self-styled â€œreformistsâ€ within the PDP as â€œbusiness as usual.â€ He claimed that former Senate President Ken Nnamani, alleged leader of the G-21, had entertained ambitions of serving as National Chair of the PDP, but that Ibrahim counselled him against it ) given that Obasanjo would â€œnever allow it to happen.â€ (It was under Ken Nnamani that Obasanjoâ€™s 2006 third term bid was quashed by the National Assembly.)

8. (S//NF) Ibrahim decried Yarâ€™Adua as a â€œruthless, cunningâ€ individual who has done nothing for the Nigerian people since he took office last May. While noting his antipathy for Obasanjo, Ibrahim averred that Yarâ€™Adua was, in his estimation, more â€œdangerousâ€ and â€œcorruptâ€ than Obasanjo. Though Ibrahim knew Yarâ€™Aduaâ€™s elder brother Shehu Yarâ€™Adua, and worked under him, he contended that President Yarâ€™Adua lacked the interest and ability to introduce reforms to the economic and political sector. Ibrahim excoriated Yarâ€™Adua for being interested only in â€œamassing wealth,â€ and claimed that First Lady Hajiya Turai was responsible for Yarâ€™Aduaâ€™s corrupt dealings. He alleged that Hajiya Turai ensured the presidential jet was routed through Dubai on their return from China last week in order for the First Lady to shop in the UAE. See also Ref C.

9. (S//NF) Moreover, Ibrahim confided that in mid-January discussions in Paris, he advised former Head of State Ibrahim Babangida (IBB) to remain outside Nigeria and not attempt a political comeback. (IBB returned to Nigeria from an extended stay in Paris March 2.) Ibrahim said he exhorted IBB not to meddle into the affairs of the PDP, since the party was on the verge of collapse, and because IBBâ€™s political relevance had significantly waned since Obasanjo came to power in 1999. Ibrahim told PolOff, as of March 6, IBB was not backing any candidate for national chairman. As well, Ibrahim surmised that military rulers, essentially, control the reins of government; however, under civilian rule, power appears more diffuse and less vulnerable to unilateral control. Without the support of the military and a significant segment within the PDP, Ibrahim said he suggested to IBB that the political climate in Nigeria at the present time was simply not conducive for his comeback.

10. (S//NF) COMMENT: Isyaku Ibrahim is a dispassionate, astute political observer, but whose political projections have not always been on the mark (Ref D); however, he remains a respected and well-informed individual who would most certainly have the inside track on the goings-on of the PDP, Nigerian politics writ large, and particularly the northern political elite. Ibrahim had also backed Obasanjo during his first term, and is arguably viewed as an important figure in Nigerian politics who has chosen to remain outside elected political office especially since Obasanjo came to power. Ibrahimâ€™s views on Yarâ€™Adua as more corrupt than Obasanjo are puzzling since he claims no association with Umaru Yarâ€™Adua, though he was closely tied to Yarâ€™Aduaâ€™s elder brother Shehu. The information alleging the First Ladyâ€™s illicit enrichment activities tracks with what the Mission has reported; however, his assertion that the First Lady is conducting such activities at the behest, or at least with the Presidentâ€™s complicity, is particularly troubling.