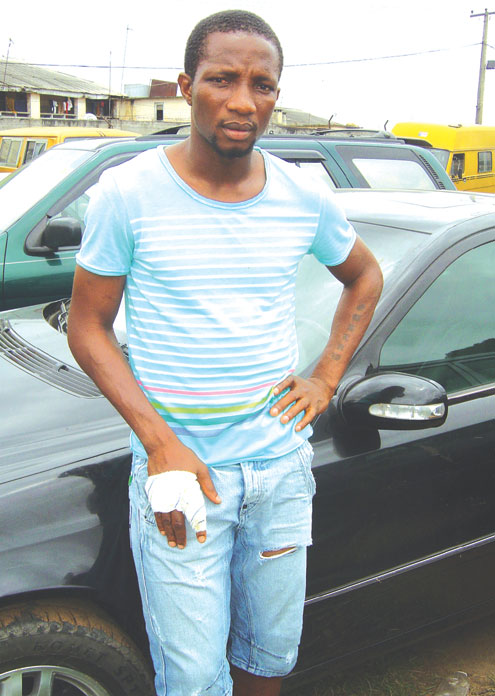 A Nigerian professional footballer based in Spain, Segun Omojuwa was abducted from church in Lagos where he went for a thanksgiving and later freed after he was tortured and parted with N2.3 million ransom.

Omojuwa, who plays for F.C. Ourense in Spain, suffered the fate after he had given an undisclosed sum of money as donation to the church.

Unknown to him, he was being monitored by some men who later abducted him and took him away in a Danfo (commuter) bus to an unknown destination.

Omojuwa was seriously battered by the men who overpowered him and tied him. He was later released after they collected some money from him.

Omojuwa told P.M.NEWS that the four men tied his hands backward and beat him mercilessly before they took N2.3 million from him, including some of his property.

The footballer said he returned to Nigeria to spend his holiday before he would go back to Spain to continue his career.

Omojuwa, who now has bruises and cuts in his right hand and legs, said he made arrangement with members of is family to give thanks to God for His mercies and blessings on the family especially himself after a successful season.

His problem actually started when he was about leaving the church. The kidnappers blocked him and prevented him from entering his Mercedes car.

He said that four men accosted him and pushed him into the waiting Danfo bus they came in.

He said that when he attempted to challenge them they threatened to kill him and throw him into the canal.

He was later released after he was tortured.

The matter was reported to the police and one of the suspects was arrested.

The suspect, Olatunji Suleiman, was charged to Apapa Magistrateâ€™s court where he is facing criminal charges.