Another Family Of 8 Wiped Out In Jos 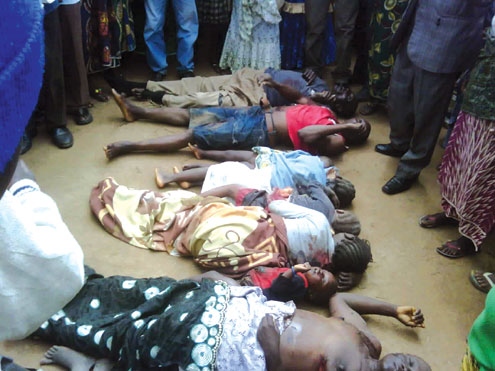 It was another day of tragedy for the people of Plateau State when unidentified gunmen this morning struck at Foron village in Barkinladi Local Government where a family of eight and a visitor to the family were gruesomely murdered.

Todayâ€™s attack at about 1 a.m. is the fourth of such attacks between Monday and today.

An eyewitness who gave her name as Beatrice explained to P.M.NEWS that the attackers came all dressed in black and were more than 30 in number.

According to her, the assailants overpowered members of the vigilance group that were keeping vigil because they were better armed.

Some other villagers who spoke in anger expressed disappointment over the lax security provided by the Plateau State government since the attacks and killings started in the area this week.

They demanded that the state government should withdraw the soldiers posted to the area and allow them to take up arms to face their enemies whom they identified as Fulani herdsmen.

They also disclosed because of the manner the assailants came into the village and the route they followed to the house of their victims, they were sure the attackers were Fulani herdsmen.

According to them, the attackers came from a village about 10 kilometres away, and the village is predominantly inhabited by Fulani herdsmen.

The Barkinladi Local Government Area Chairman, Emmanuel Lomang, who was at the scene of the killing, also expressed dismay over the inability of the soldiers and other security agents to protect the state from such attack.

He therefore requested that the state government should beef up security to prevent further bloodshed in the state.

Meanwhile, the attack happened a day after the state governor, Jonah Jang returned from a routine health-check overseas.

He addressed newsmen yesterday concerning the effort he was making to beef up security to put an end to the killings.

However, P.M.NEWS gathered this morning from the attacked village that the battle line has been drawn between the Berom people and the Hausa-Fulani invaders.

Some of them, mostly women who spoke at Foron village today vowed that todayâ€™s attack on the natives of Plateau will be the last because they will join forces to ward off the attackers.