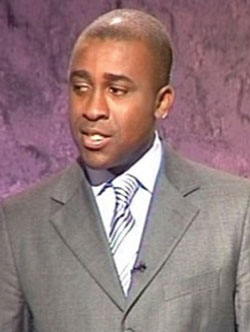 Frank Edoho, presenter of the popular television quiz show, Who Wants To Be A Millionaire? has confessed that he is not as brilliant as people think.

Edoho who co-anchored the red carpet tribute in honour of the late Lady of Songs, Christy Essien-Igbokwe, alongside Kate Henshaw-Nutal, said: â€œthe questions have ready-made answers. Mine is just to ask and people answer.â€

He said that he was almost mesmerised by a young boy during an event when he asked him of the capital of a country in the open. â€œCleverly, I said let the audience answer it.â€

Speaking about his financial status, Frank said â€œI am not as rich as you think as well. Iâ€™m just there as the anchor person and to just append my signature on the cheque. It is not my money, but that of the sponsors.â€

The presenter gave a good account of himself during the event which attracted people from all walks of life.