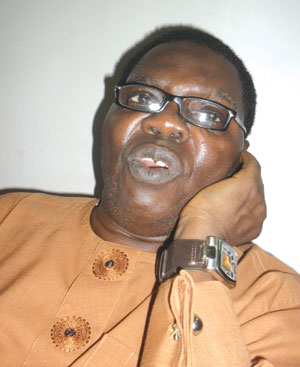 Â Juju music maestro turned preacher, Evangelist Ebenezer Obey-Fabiyi, who lost his wife recently, spoke about the incident, the secret they both shared and other issues

Sorry for the death of your wife.

It will be wrong to ask the question, how do you feel and cope?

Well, that is a good question for a child of God, even given the present circumstances. Well, I thank God. The reality of life is that there are many things God made known to us but we were not careful enough to understand. Some understand but there are some who are yet to understand. For example, in the book of Genesis 1:27-28, God blessed them and said, be fruitful and multiply. So the word of God to Adam and Eve is be fruitful and multiply. That summarises everything, that is, go to the world and be fruitful and multiply and have dominion. The meaning of that is that we are on assignment to come and fulfill a purpose and by the time we finish that assignment on earth, we must go back home. Heaven is our home. With that, we must be aware that one day, after the multiplication, we have to go back home.

Is that the faith you hang on to say mummy has gone to rest?

The reality is that one day, we must go back to rest including me and you. So, by the time we finish our assignment on earth, we will go back to rest because over there, there is no â€˜I want to do this or that.â€™ It is home.

Did you have a premonition that she would die before you?

No, it is very difficult for anybody to say the time one person would die or not, itâ€™s only God that knows when He will call anyone of us. It is an area no one should bother to question.

When she was ill, did you feel it would lead to death?

I am a child of God that has faith in God. I knew that she was ill and I believed she was going to be well, but when God took her home, I had the understanding and that was the reason I quoted Psalm 48:14.

Before she died, she nursed an ambition of being part of your 70th birthday celebration coming up in a few months?

Yes, she was part of the planning process. She wanted to see and be part of my 70th birthday in a few months’ time.

Now that she is no more…?

Well, I am not a small boy. I am in the Lord and Iâ€™m also a minister of God. I read the word everyday. I live in it, eat it. So, the word of God has become a reality in my life to the extent that the way I see things is not the way others see them.

Despite the word of God, you must be emotional because she was your wife?

You are not where I am, that is why you are thinking that way. If you are where I am, my closeness to God, my understanding of the word, what I am living for, I understand where I am and where I am going at this stage. So, that is the reality. I have love for my wife, I took her as somebody so special. I will miss her. I have been preaching to people who come to commiserate with me, but when I am alone, I shed tears. I donâ€™t weep in the public but when I am alone, I cry a lot, wipe the tears. Despite that, I know where I am coming from and where I am going because I know that I am temporarily on this earth. I know that I am going home like the word of Jesus Christ which says in John 14, that â€œlet not your heart be troubled.â€ So, that is where Iâ€™m standing upon. All the same, we cannot erase the emotional side of it, but Iâ€™m standing by the word. I know I have a time to spend on earth and when it is time, I will go, either 80, 90 or otherwise, but when it is time, I will have to go.

So you are ready to go any day, any time?

Are you changing some of the birthday plans in her honour?

We canâ€™t think of birthday for now because it is just a few months from now and my wifeâ€™s death is still fresh. So, how can we be talking about birthday and the woman who was planning the birthday has gone?

Did she ever share any secret with you before she died?

My wife of 48 years, well, we had many things that we have been sharing.

It canâ€™t be dismissed. The secret is that I married her when I was struggling and not when I was a celebrity, fame and other things came. So, she lived her life to the family, she was not the outgoing type. For me, I was going out and she was always there to ensure that the home front did not suffer. The secret is that she committed her life to the family. She only went out, maybe, at club functions and when it was getting late, she would be dozing.

What was her role during your radical days as Commander Ebenezer Obey?

Her role was what I have just told you. She was very committed, caring and very devoted to me. We weathered the storm together.

She died at 67 and you are 70. How were you able to manage the marriage?

It depends on choice and she was my wife. God gave me my wife and that is my age and hers.

Since she died, what have you observed in terms of love from people?

I thank God because people have been so wonderful to me as dignitaries and colleagues. Highly placed personalities, friends, the body of Christ, that is the church of God, not only one denomination. For instance, Pastor Adeboye, who is in London, called to condole me. The president of CAN and PFN, Pastor Ayo Oristejafor, a friend of mine, has called me. Governor Ibikunle Amosun, who was on Lesser Hajj, called from Saudi Arabia and also sent delegates who are members of his executive council. Governor Fashola and former governor of Ogun State, Segun Osoba, have been here on several occasions, while Osoba calls me all the time. Former President Olusegun Obasanjo called and spoke with me on phone; Mike Adenuga called and wrote; Otunba Suboni Balogun, Alhaji Azeez Arisekola, Rasheed Gbadamosi, Governor Mimiko, Governor Fayemi and others.

Also, colleagues like King Sunny Ade, Wasiu Ayinde, Onyeka Onwenu, Prince Adekunle, Laolu Akins and others. In fact, the Ooni of Ife, Olowu of Owu, Oba Tejuosho. It is beyond expectation.

How do you feel having this kind of attention?

In fact, I am overwhelmed. I cannot express how I feel. The press too have been surportive.

When did you speak with her before she died?

We spoke a day before she died. We even discussed about the death of my elder sisterâ€™s husband. I was with her and told her with a promise that I would be with her on Monday, only to learn that she was in a coma and in an intensive care unit and she later died.

Were you suspecting that she would die?

I had the belief that after the Indian trip, she would be okay and all that was left was just for the physiotherapist to work on her.

Why was Abeokuta in Ogun State chosen for the burial?

That is a personal decision. She was my wife and I am from Abeokuta. So, she has to sleep in my home town. There is no going back on that.