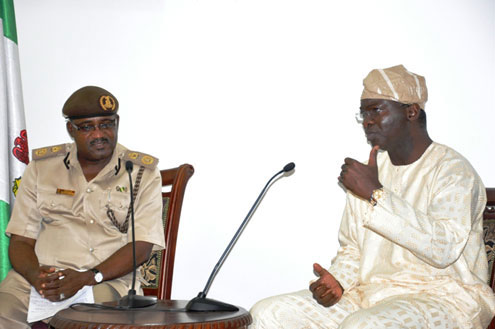 Lagos State Governor, Mr. Babatunde Fashola SAN (right) with the Comptroller, Immigration Service, Lagos State Command, Alhaji Abass Ahmed (left) during a courtesy call on the Governor by the Comptroller and other senior officers of the Service at State House, Alausa, Ikeja, on Friday, September 9, 2011.

Against the backdrop of recent security challenges in the country, Lagos State Governor, Mr. Babatunde Fashola (SAN), Friday urged the Nigeria Immigration Service NIS) to redefine public perception of its role as an agency dealing just with the issuance of passports by rising up to the occasion by contributing meaningfully to the security of the country.

Governor Fashola, who spoke at the Lagos House while hosting the Comptroller of the Nigeria Immigration Service, Lagos State Command, Mr. Abbas Ahmed who paid him a courtesy visit, said the Immigration Service, in its conception and by its territorial location should be at the forefront of intelligence gathering in the current efforts to secure the country.

The Governor said of the two levels of crime fighting, namely reactive and proactive levels, the most efficient is the proactive level â€œwhere the State acts to ensure that the successful planning and execution of crime is reduced to the barest minimumâ€, adding, â€œI think apart from one or two other organizations that I can think of, Nigerian Immigration Service is, perhaps, the most strategic rallying point for intelligence gathering in the countryâ€.

â€œIn the heart of that organization is the ability to gather intelligence, sifting through tons of papers, profiling photographs, profiling people who go through and pass through our border posts and so many other things,â€ the Governor said, adding that the time has come for the agency to rise to the present security challenges of the country.

Governor Fashola told the visiting Comptroller: â€œThis is the time when you can, by your very clear action, demonstrate to Nigerians that you are more than an agency whose role is simply to issue passports. It will not be achieved simply by talking about it.â€

Expressing joy that the challenge of issuing passports which has confronted the organization over the years and to which it has been associated by Nigerians has largely been overcome, Governor Fashola declared: â€œIn the same sense in which you have largely overcome the challenges of that assignment, I think you can redefine your role, you can place yourselves in the consciousness of Nigerians by the contributions you make now, by the policies you allow.

â€œYou can do this by the actions that you take that help them realize that not only are you a security organization and agency, you are one that is conscious of and alive to your responsibilities; one that is able to also discharge your duties. Believe me, if you do this, you will see an overwhelming response, acknowledgement and acceptance from the Nigerian public,â€ the Governor said.

He continued, â€œthe elements could not have gathered better to give you an opportunity to lay your stake towards contributing to securing the sovereignty and territorial integrity of Nigeria.â€

Congratulating the Comptroller for the decision of the organization to create a third passport office in Ikeja, Governor Fashola said his administration remains a willing and ready partner with the Nigerian Immigration Service in all its efforts and activities aimed at achieving effective security for both Nigeria and Lagos State, adding that it was willing to assist the command in any way possible to accomplish its assignments in the state.

The Governor commended the Comptroller for his effective leadership under which, according to him, â€œthe organization has clearly demonstrated efficiencyâ€, adding, â€œIt is one thing to plan and another thing to make the plan a reality. The challenge of your organization today is also characterized by the process of bringing to reality the many laudable plans of the organization. This is where quite a number of people have stumbled.â€

Earlier in his opening remarks, the Comptroller said the purpose of his visit was to register the appreciation of the Nigeria Immigration Service to the Lagos State Government for its assistance to the Service, especially the Lagos Command and also to inform the Governor of the creation of a new passport office (the third in Lagos) in Ikeja.

On the current security situation in the country, the Comptroller, who noted that the organization is hardly known to the general public beyond the issuance of passports, said aside from that function, the Nigerian Immigration Service â€œis a security organizationâ€, which, according to him, deals with state crimes such as insurgency, terrorism and espionage.

â€œThese are serious crimes that affect the integrity of the country. Apart from the issuance of passports, we watch people, both Nigerians and foreigners, to ensure that they do not commit these state crimesâ€, the Comptroller said adding that the organization was ready and able to deal with the present security situation in the country.

Also present at the occasion were the Secretary to the State Government, Mrs. Ranti Adebule, Commissioner for Home Affairs and Culture, Mr. Oyinlomo Danmole, the Special Adviser to the Governor on Security, Major Tunde Panox (retd) and the Senior Special Assistant on Foreign Relations, Ms Toyin Caxton-Martins, among other state government officials while the Comptroller was accompanied on the visit by Deputy and Assistant Comptrollers manning strategic entry points and passport offices across the state including the new passport officer for the newly created Ikeja Passport Office.