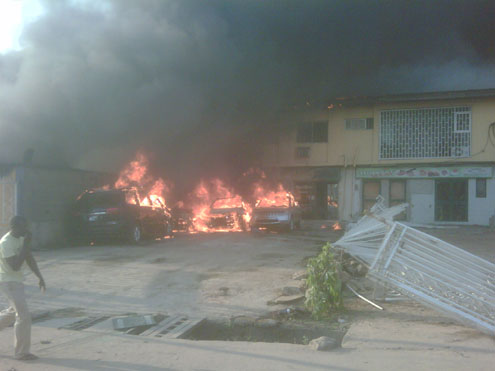 Properties worth billions of naira were this evening destroyed as fire razed the factory of Maxi Foam, situated at Ile-Epo Bus Stop, Ojodu, Ikeja Lagos.

The inferno, which is still spreading to neighbouring buildings as at the time of filing this report, started at a section of the foam factory at about 5 pm.

Â P.M NEWS gathered that it took the Lagos State Fire Service men more than one hour to arrive the scene of the incident.

They arrived exactly at 6:35pm, more than one hour after a distress call was put to them.

Even after their arrival, they seemed helpless as the fire continued to raze more houses.

The fire service men came with two vehicles, but ran short of water shortly after their arrival.

Meanwhile, their return sparked protest among youths in the area who made making frantic efforts to bring the fire under control.

P.M.NEWS gathered that this is not the first time Maxi Foam factory will be gutted by fire.