Helen Ukpabio Calls On Buhari To Apologise Over Boko Haram 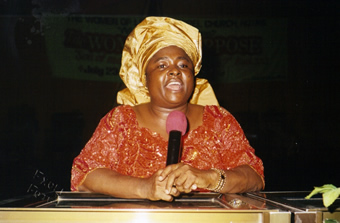 Lady Apostle Helen Ukpabio, the founder of the Liberty Gospel Church, has called on General Muhammadu Buhari, the presidential candidate of the Congress for Progressive Change, CPC, to apologise to Nigerians over the bombings and killings by the Boko Haram sect in northern Nigeria.

Apostle Ukpabio, who was speaking during an interactive session with journalists organised by the Calabar Christian Leaders to react to the spate of bombings in the country, said Buhari at the peak of the April 2011election campaign did threaten that Nigeria would be ungovernable if he fails win the presidential election.

â€œ I watched Buhari on television and on radio during the April election threaten that there would be trouble in Nigeria if he did not win. Even when he did not come here and several parts of the country to campaign, he still felt he had what it takes to become president and that threat is manifesting today.

“We should on that score hold him responsible for the violence. If you have forgotten, I have not forgotten; he should apologise to Nigerians,â€ she said.

Ukpabio, who is also famous for producing Nollywood films and videos, said Christians have the capacity for violence but they are being constrained by their faith which preaches love but when the violence by the Boko Haram is always directly targeted at them, they would have no choice but to react.

â€œIn our Bible, we are admonished to protect our faith even with our blood, but we are constrained to walk always in love but that should not be taken for granted because the Bible also says in the time of John the Baptist, the kingdom suffereth violence and the violent take it by force â€.

Bishop Josef Bassey of Godâ€™s Heritage, who read the speech of the leaders, said the Sultan of Sokoto, who is the head of Islam in Nigeria should call on the Boko Haram who are his Muslim brethren to stop the violence in the northern part of the state.

â€œWe in Christianity have authorities we respect and that also goes for the Muslim. He and their head should call on them to stop the killing of innocent peopleâ€.

He said it was time for National Conference to be convened to determine the future of the country rather than resort to anarchy.

â€œIn a state of war, the constitution of the country and the rule of law are suspended and rather than get to that state, we should convene a National Conference to determine the future of our country, any state that wants Sharia can be governed by Sharia law while any that prefers Cannon law can have same.â€

The Christian Leaders who also condemned the destruction of property in the University of Calabar attributed it also to the handiwork of agents of Boko Haram.

â€œThey have been threatening to come down here and the fact that the destruction took place the same day with the bombing of the United Nations building took place shows it is not a coincidence but a plan hatched a long time ago,â€ Bishop Bassey said.

He warned that any further attack on the city of Calabar that is noted for peace would not be taken lightly while concluding that the last word has not been heard from the Christians should the bombings continue.

â€œViolence is not the preserve of any community or religion, if these acts continue, we would react and very soonâ€. The Bishop concluded