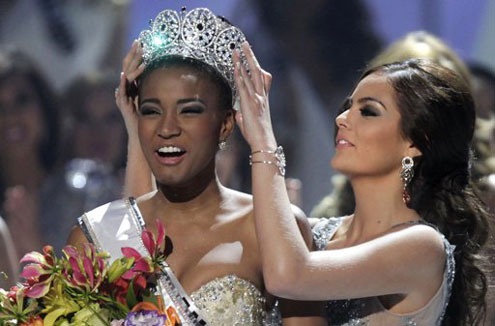 Newly crowned Miss Universe Leila Lopes hopes her victory will allow her to assist her native Angola further escape its history of war and impoverishment and said she plans to focus on combatting HIV around the globe.

â€œIâ€™ve worked with various social causes. I work with poor kids, I work in the fight against HIV. I work to protect the elderly and I have to do everything that my country needs,â€ she said. â€œI think now as Miss Universe I will be able to do much more.â€

Responding to questions, Lopes said that she has never had cosmetic surgery of any kind and that her three tips for beauty were to get a lot of sleep, use sun block even when itâ€™s not sunny and to drink lots of water. She said her smile was her best weapon in the competition.

Asked about racism in light of the fact that sheâ€™s one of the few blacks ever crowned Miss Universe, Lopes said that â€œany racist needs to seek help. Itâ€™s not normal in the 21st century to think in that way.â€

Lopes is Angolaâ€™s first winner. She beat out 88 other competitors to win the title during the 60th anniversary of the worldâ€™s biggest beauty pageant. She replaces last yearâ€™s winner, Ximena Navarrete of Mexico.

She deftly handled the interview question that is asked of the remaining top five contestants. She was questioned about what physical trait she would change if she could.

â€œThank God Iâ€™m very satisfied with the way God created me and I wouldnâ€™t change a thing,â€ Lopes said. â€œI consider myself a woman endowed with inner beauty. I have acquired many wonderful principles from my family and I intend to follow these for the rest of my life.â€

The first runner-up was 23-year-old Olesia Stefanko of Ukraine and the second runner-up was Priscila Machado of Brazil. The third was Miss Philippines and the fourth Miss China.

Contestants spent the past three weeks in Sao Paulo, trying to learn samba dance steps, visiting impoverished children and kicking a football around for cameras as the Miss Universe pageant came to Brazil for the first time.

Despite battling against a home country favorite, Lopes won over the audience, speaking in the shared language of Portuguese. Angola, like Brazil, is a former Portuguese colony.

â€œShe captivated the crowd and we were all behind her,â€ said Brazilian Natalie Bursztyn, 20, who was in the crowd inside Credicard Hall where the event took place. â€œIt was great that the judges also saw what the fans saw and gave her the crown. Her dress was beautiful and she knew exactly what to say when they asked her the question about her looks.â€

Another fan in the audience, Carolina Rocha, said Lopesâ€™ win was â€œwell deserved, we were cheering for her all along. Her smile and her friendliness was what set her apart from the others. She also answered her question very well, that likely helped her a lot.â€

U.S. broadcast journalist Connie Chung was one of the celebrity judges, and said before the competition that she was taking the contest seriously.

â€œI know my job and Iâ€™ll be tough, but fair,â€ Chung said. â€œYou have to keep in mind that these women are not objects just to be looked at. Theyâ€™re to be taken seriously. I want to choose somebody I take seriously and the world takes seriously, too.â€

Paula Shugart, president of the Miss Universe organization, was hyped for the night.

â€œItâ€™s our 60th anniversary, itâ€™s a very big show,â€ she said. â€œWeâ€™re anticipating close to a billion viewers from around the world.â€

Shugart said it was fitting the globeâ€™s biggest beauty pageant be held in Brazil at this time, as the nation prepares to host some major events in the coming years.

â€œI donâ€™t think there is any doubt in the rest of the worldâ€™s mind that Brazil is the place, between hosting the Olympics and hosting the World Cup,â€ she said. â€œI love the fact weâ€™re going to kick it off. I always say weâ€™re the â€˜World Cupâ€™ of beauty.â€

The contestants must never have been married or had children and must be at least 18 years of age and under 27 years of age by Feb. 1 of the competition year.

The pageant, hosted by NBC â€œTodayâ€ anchor Natalie Morales and the Bravo networkâ€™s Andy Cohen, was broadcast live on NBC and distributed to about 170 countries. The contest is co-owned by Donald Trump and NBC, and the celebrity judges included Chung and two prominent Brazilians, supermodel Isabeli Fontana and Indy race car driver Helio Castroneves.

Morales, who is half Brazilian, said that â€œwhatâ€™s most important is for the women to be beautiful inside and out.â€

For Cohen, the task of hosting was an easy one.

â€œItâ€™s a fun job. All I have to do is stand there, smile and scream the names of countries,â€ he said.