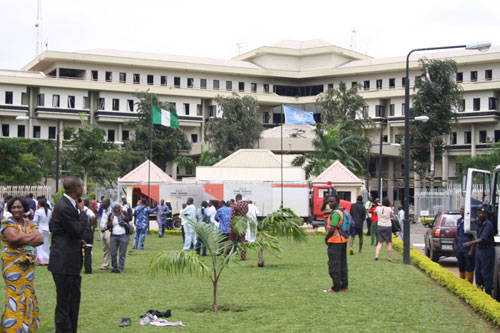 A memorial was on Thursday held at the damaged premises of the United Nations House in Abuja in honour of the victims of the bomb blast which occurred on Friday, 26 August.

Glowing tributes were paid to the souls of the 23 people who lost their lives in the bomb blast by representatives of sympathizers from across the globe.

In his welcome address, Senator Mohammed Bala, the Federal Capital Territory Minister, sympathised with the global UN family and the immediate families of the victims over their loss and also with the 129 persons who are injured and are receiving medical attention in medical institutions both in Nigeria and abroad.

He pledged the resolve of the President Goodluck Ebele Jonathan-led Federal Government to fight violence and terrorism and the desire to provide safety nets to protect lives of Nigerians and their properties.

The Minister reiterated the resolve of the Federal Government to provide a temporary office accommodation for the global body pending when a permanent one will be ready.

UN Resident Coordinator in Nigeria, Mr. Daouda Toure, had earlier disclosed that a total of 116 people were injured and received treatment; 64 of them UN staff members, 36 non-UN staff members and 16 persons yet to be identified.

He presented the address of the Secretary General of the UN, Mr. Ban Ki-Moon.

“We are gathered today in honour of our fallen colleagues who were blown away in that unprovoked attack against the UN. That attack is against every principle and value of the UN. It is gross ignorance of the non sectarian and non partisan nature of the UN which partners with government of any race and culture to enrich the lives of the people through provision of health care solutions to reduce women and child mortality rate across the world. Yet those bombers attacked us and cut short lives, dreams, aspirations and ambitions to make this world a better place.”

The UN chief stated that the global family is not broken as a people by the bomb attack and that as a people, the UN family will continue to forge ahead with the vision of the world body.

Governor Aliyu Babangida Muazu of Niger state who represented all the Nigerian state governors pledged the determination of the Nigeria Governors Forum to support President Jonathan in the fight against terrorism and ensure that terrorists do not take over Nigeria.

He also promised the speedy relocation of the UN operations office to a temporary site by the Federal Government before a permanent structure will be delivered to the world body.

This, the governor said, will ensure the continuation of the noble works of the UN in Nigeria.

The Minister of Foreign Affairs, Mr. Olugbenga Asiru, in his remark noted that Nigeria had stood at the forefront of global peace mission and declared that this posture will not be affected by the attack.

The minister declared that the nation has been strengthened by the bomb incident at the UN House and that Nigeria will continue to be the anchor of UN as far as the achievement of global peace is concerned.

The 12-year old son of one of the victims’ relations, Master Edward Dede, gave a speech on behalf of the victims and prayed for the repose of the souls of the departed humanitarians and prayed God to grant them the fortitude to bear their loss.

As at the time of filing this report, more solidarity messages were still being delivered by dignitaries at the memorial ceremony.

A Norwegian, Ms. Ingrid Midtgaard, an Associate Expert with the UNODC, is the only non-Nigerian who died in the blast.