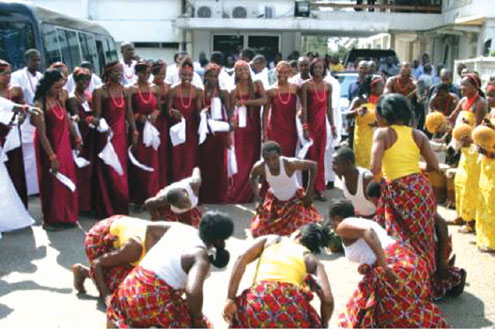 â€¢The contestants dancing at the Edo Government House when they visited Govenror Adams Oshiomhole before going into the forest. PHOTO: FUNSHO AROGUNDADE.

For the next three months, millions of television viewers across Nigeria and Africa will be treated to exciting moments of adventure, fun and suspense as the TV reality show, Gulder Ultimate Search, GUS, hits the screen from Saturday 17 September.

Nigeriaâ€™ number one hit television reality show from the Nigerian Breweries plc, in its eight season, would be held in the jungle of undulating plateau of Ososo Mountains in Egbetua Quaters, Ososo, Edo State, thereby making it the second time the state will be hosting the search.

Already, 30 young, strong and able-bodied Nigerians are in the jungle where they will slug it out for three month in a search that has been dubbed the â€œContest of Championsâ€.

Apart from the fact that the show contestants have been increased to 30 from the last 12 that participated last year, for the first time, the show will have two anchor persons-Bob Manuel Udokwu and Darey Art Alade.

The lucky 30 adventure-thirsty individuals that scaled through the gruelling screening for the show consist of an equal mix of 15 young men and ladies.

They will all prove their mettle as worthy contestants, capable of being crowned champion between this September and December. But the main attraction it offers whoever emerges as the Ultimate Man/Woman is an awesome reward of N7 million, a Brand New SUV and N500,000 wardrobe allowance, and of course the bragging rights of the title of the Ultimate man.

Also speaking with P.M.NEWS in Benin, Mrs Aanena Elizabeth Jemitola, the state Commissioner for Arts and Culture, expressed her happiness about the state hosting the search for the second time.

She said the search in the past years had proved to be â€˜one show â€œembedded with a lot of potentialsâ€.

â€œThe show is one that touches base through its love for the jungle and the rural areas. I believe that it will also avail the host rural people a lot of opportunity in the areas of commerce, environmental development and ultimately allow them to discover themselves, their worthiness and importance,â€ Jemitola told P.M.NEWS .

Also commenting on his readiness, Efejiro, one of the lucky contestants said during a chat with P.M.NEWS: â€œI really wanted to taste that what is called fame. I wanted to unravel the determination that has been boiling inside me all these years, to showcase it by taking the bold step to come out and participate in the search.

â€œ I must tell you that this is the most remarkable step in my life that I have taken, a very bold one to be remembered and Iâ€™m going into that jungle to claim that fame and fortune as the ultimate man.â€

The Gulder Ultimate Search started out in 2004 on the mysterious Snake Island, Lagos and then moved to Obudu Cattle Ranch, Cross River State, the following year. In its third season, the show was held at NIFOR, in the forest that domiciles the Nigerian Institute for Oil Palm Research, in Benin, before it moved to Shere hills in Jos, Plateau State for the fourth edition. In 2008, the Ultimate search was held at the Agwu Hills, Enugu State, then moved to Agba Hills in Ada, Osun.

Last year was the turn of Ogun State as the battle for the search took place at the thick plantations of Omo Forest Reserve in Area J4, Ijebu East Local Government Area of Ogun State where 12 young Nigerians slugged it out for the honour of who becomes an â€˜Ultimate Heroâ€™.