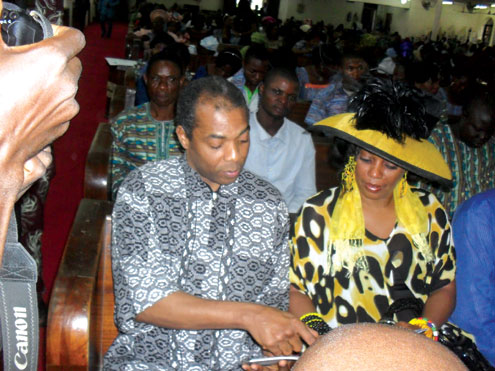 â€¢Femi and Yeni in the church.

Afrobeat king and the son of the late Fela Anikulapo-Kuti, last week, went to a church for the first time in over 40 years as he attended the commendation service in honour of Christy Essien-Igbokwe at the Archbishop Vining Memorial Church Cathedral, Oba Akinjobi Road, GRA, Ikeja, Lagos.

Femi, who arrived the church about 10 minutes after the commencement of the service, was later joined by his elder sister, Yeni and they both worshipped together among friends, family members of the deceased, artistes and others, for about one and a half hours.

Speaking with P.M. Entertainment after the service, Femi said “I have not come to the church but to honour Christy who was very dear to my heart.”

Others were the Elegant Stallion, Onyeka Onwenu, who dazzled the crowd with her sonorous voice when she was asked to honour the deceased with a special number as well as the Guv’nor of Niteshift Coliseum, Ken Calebs Olumese, Stella Monye, Omatshola Iseli a.k.a. Tee Mac and Wunmi Obe.