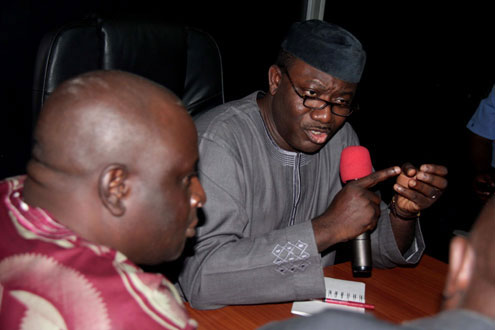 State governors have made a case for the establishment of state police to deal with the serious security challenges facing the country now.

Fayemi, who was answering questions during an interactive session with senior editors of the publications, said there is a consensus among the state governors on the need to have state police and that he and his colleagues were not apologetic about it because it would go a long way in dealing with the prevailing security challenges in the country.

He said the issue was the main agenda of the recent meeting by the Governors’ Forum after which the resolution of the governors was forwarded to President Goodluck Jonathan, adding that issue was also discussed at the recent Council of State meeting.

Speaking about his achievements since he came into office eleven months ago, he said the level of rot his administration met was so massive that he has been cleaning up virtually every facet of the structures in the state and has managed to do away with the worst.

Fayemi said the educational system, healthcare delivery, civil service and other facets of the society have been cleaned up, adding that his agenda for transforming the state is on course eventhough much is still to be done.

He said the internally generated revenue has increased from N109 million when he took over to N300 million after he plugged all the leakages that characterised governance in the past.

The governor added that by the time his administration begins an aggressive tax drive and pursue commercial agriculture, the N1 billion internally generated revenue target he set for himself will be achieved.

He said investors and development partners are returning to Ekiti, adding that most of the roads are being fixed while he will stop at nothing to beautify the state capital, Ado-Ekiti, which he said, is an eyesore.

Fayemi said the social security system through which elderly people are paid stipends for their upkeep, the first of its kind in the country, has gone a long way in ameliorating poverty, in addition to the employment of 5,000 graduates for the volunteer scheme.

He decried the huge cost of governance and excesses of people in government in the country, saying it is absurd and a product of the presidential system of government the nation has embraced.

He said he prefers the parliamentary system of government which is cheaper to run and is closer to the grassroots and that legislators should work on part time basis.