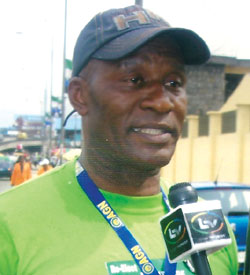 As part of efforts to make his administration one of the best, the Chairman, Actorsâ€™ Guild of Nigeria (AGN), Lagos State chapter, Emeka Rising-Ibeh, has organised a training workshop for young actors in the guild.

The workshop, which was recently held in Surulere, was attended by a couple of established actors, producers and directors, who shared their professional experience with the younger ones. The programme, NollywoodReel gathered, was free for all AGN members, but participation form was sold to outsiders who showed interest in it.

Some of the young actors who spoke to NollywoodReel described the initiative as laudable, owing to the fact that it has further broadened their knowledge about acting and the motion picture industry as a whole.

Tchidi Chikere was one of the popular directors that gave lectures at the well-attended workshop.

According to Emeka Rising, â€œwhen we were elected into office, we promised to give the upcoming artistes in our midst a good chance and this is just part of the efforts geared towards that. This is just like a tip of the iceberg because there are still many programmes in the offing.â€