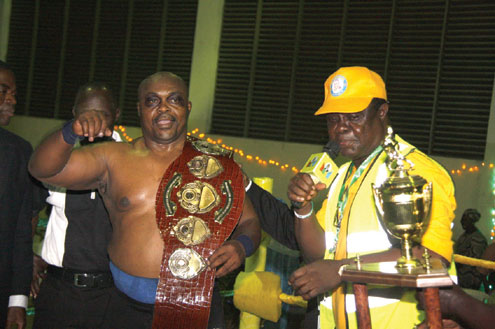 â€¢Royale Rumble winner, Banilux Bulldog of Scotland receives his belt and trophies from Primate Charles Odugbesi (right), Chairman of the LOC at the end of the BRF Wrestlemania 2011 in Lagos on Friday. Photo: Emmanuel Osodi.

Banilus Bulldog of Scotland was declared winner of Intercontinental Wrestling Championship tagged BRF Wrestlemania 2011 after he emerged the last man standing in the Royale Rumble that climaxed the four-day wrestling tournament in Lagos at the weekend.

Dignitaries including politicians, traditional rulers, captain of industries, sports administrators and fans were treated to the best wrestling action during the closing ceremony of the tournament at the Sports Hall of the Teslim Balogun Stadium, Surulere, Lagos.

The Royale Rumble, which was the last bout of the final day, featured all wrestlers that participated in the competition. They included Babimkiller from Austria, Kovak from Hong Kong, Erica Sailer from Norway, Dynamite from USA, Tymupepe from DR Congo, Nudami from Angola, Stahan from Cameroon, USA Bing from DR Congo and some notable local wrestlers like Afro D Giant, Mighty Man, Hot Tempo, Scorpion and Super Hercules.

The coveted trophy was presented to the Scottish, Bulldog, who was decorated by the Chairman of the Local Organising Committee, LOC, Primate Charles Odugbesi a.k.a Blessed Charlie.

Deputy Secretary of the LOC, Comrade Abass Lateef poured encomiums on Governor Babatunde Raji Fashola in whose honour the international tourney was staged. He commended the support the organisers received from individuals, corporate bodies and the media.

â€œWe are indeed grateful to everybody that supported us for the success of this competition,â€ he said.