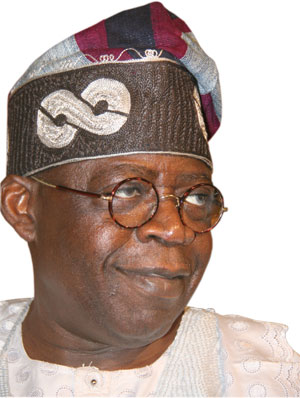 There are strong indications that Â  the office of the Attorney General of the Federation and some leaders of the PDP who may have found sympathetic ears in the presidency are behind the ongoing attempt to destabilize and drag in the mud the name of Nigeriaâ€™s leading opposition voice, Bola Tinubu., a statement by Tinubu’s media office charged today.

At present, desperate moves are afoot by the office of the AGF to find by all means and to manufacture enough evidence to prove their case against Nigeriaâ€™s leading opposition voice, Asiwaju Tinubu, the national leader of the Action Congress of Nigeria. The resort to these subterranean moves is caused by their failure to get credible individuals to come forward as witnesses to prove their allegations.

Another dimension of the desperate moves of these individuals include the recent media leaks from the office of the AGF that the charges against Asiwaju Tinubu would be amended to include perjury so as to strengthen their so-called â€œiron clad caseâ€ against the national leader of Nigeriaâ€™s leading opposition party, ACN.

Similar reports in some sponsored media also alluded to the fact that the government also plans to drag before the tribunal three other ex- governors for alleged similar offences, a move aimed at deceiving the public that Tinubu, Nigeriaâ€™s leading opposition voice, is not being singled out.

It is deceitful and clear subterfuge for government to continue to mouth the rule of law, while hounding political opponents and applying different standard of justice to members of the opposition while shielding its members from prosecution. Unfortunately, Nigeriaâ€™s democracy remains imperiled under the clutches of a ruling party that no longer wants to rule for 60 years but forever.

For PDP and a government that claim they believe in the rule of law and with the Freedom of Information law in force, one would want to ask why they are more interested in publishing the list of accounts allegedly traced to Asiwaju Tinubu without disclosing how much was involved and other relevant details.

The same act gives them the access for full disclosure. There is a clear plot to deceive the public into believing that Tinubu, Nigeriaâ€™s leading opposition leader stashed away millions in foreign bank accounts.

In the absence of documentary and individual evidence, the government continues to squander public funds on frivolous and politically motivated investigations and trial against imaginary enemies. The public would like to know, after 5 years, how much has been expended on this case and what is the actual amount in question.

“Instead of focusing on strengthening the rule of law, they continue to expend their energies and public resources on silencing opposition voices. Most Nigerians suspect also that the AGF, Mohammed Adoke, has failed repeatedly to give the President sound, professional and unbiased legal advice on several matters that would have enhanced the rule of law. Tinubu, a leading opposition voice has been a consistent advocate of the rule of law and he is eagerly anxious for government to prove its case beyond reasonable doubts. Those who allege must prove.Tinubu is not perturbed, rather he is assured that the judiciary is up to the task and will in this matter dispense justice without fear or favor,” the statement added.