Jonathan: Nigeria Is Committed to Global Fight Against Terrorism 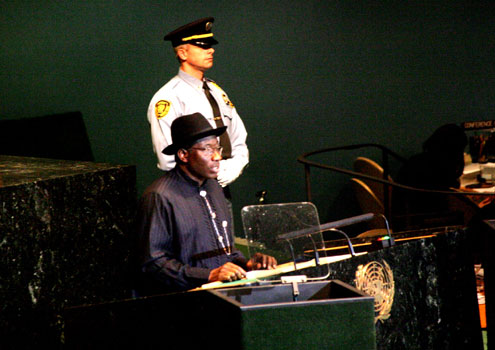 President Goodluck Jonathan on Wednesday assured the global community of the commitment of his administration in the fight against in Nigeria and worldwide in an address he delivered at the 66th Session of the United Nations General Assembly. The President who listed some of the steps his administration has taken in the fight against terrorism at home also canvassed for the reform of the permanent membership of the Security Council to include Nigeria even as he renewed his campaign for global action to contain the spread of light arms.

He also told the General Assembly of the United Nations that hope of global peace after the end of cold war has been dashed by the employment of terrorism as a form of political action across the world thereby constituting danger to international peace and security. But he affirmed that the global community must not surrender to terrorism.

â€œ We must win the war against terrorism because it infringes on the fundamental rights of all peoples to life and to live in safety from fearâ€, said Jonathan who noted that there has been upsurge of terrorist attacks in Nigeria over the past few months.

While commiserating with the UN family over the 26 August bombings on its building in Nigeria which claimed 23 lives, President Jonathan said the series of attacks have strengthened Nigeriaâ€™s resolve to fight against terrorism.

â€œMr. President, for us in Nigeria, terrorist acts, rather than intimidate, will only help to strengthen our resolve to develop appropriate national strategies and collaborate even more closely with the international community in the fight against this menace

â€œAs part of Nigeriaâ€™s efforts to fight terrorism, I signed into law the Terrorism (Prevention) Bill 2011 and the Anti-Money Laundering (Prohibition) Amendment Act on the 3rd of June this year. The new laws not only outlined measures for the prevention and combating of acts of terrorism, but also prohibit the financing of terrorism and laundering of the proceeds of crime. Nigeria will continue to work with the UN and other partners in this global fightâ€, said the President.

â€œIn this connection, the UN Counter Terrorism Implementation Task force is launching its first project in Abuja in November 2011, aimed at conflict prevention and countering the appeal of terrorism to youth through education and dialogue.

â€œIn addition, Nigeria is a member of the new global body, the Global Counter-Terrorism Forum (GCTF), initiated to galvanize and pull our efforts together to fight the scourge in all its ramifications. We pledge to continue to work with all stakeholders, as we enlarge and intensify our partnershipsâ€, said the Nigerian President

While identifying with the theme of this yearâ€™s debate of engaging the role of mediation in the peaceful resolution of conflicts in the world, President Jonathan proposed the establishment, under the Secretary-Generalâ€™s Office, a Conflict Mediation Commission, â€œto be charged, among others, with the collation of information on conflict situations across the world, identify the dramatis personae and develop appropriate strategies for initiating resolution of such conflicts. The Commission will also develop rules of engagement, including sanctions which would apply to those who may obstruct efforts to resolve conflicts peacefullyâ€.

But he said for the idea of resolving conflicts through mediation to succeed, the issue of trafficking in Small Arms and Light Weapons must be frontally tackled at the global level. President Jonathan noted that easy accessibility and availability to unauthorized persons and groups is at the root of instability and insecurity in much of the countries in the developing world. â€Even worse, the proliferation of these weapons has proved handy in the hands of terroristsâ€.

â€œThis explains our commitment to, and preoccupation with, the actualization of an Arms Trade Treaty (ATT) that robustly addresses the illicit trade in Small Arms and Light Weapons which, as we all know, are among the major causes of destabilization and conflict in West Africa.

â€œThe danger of proliferation of, and illicit trade in Small Arms and Light Weapons informed Nigeriaâ€™s decision to co-sponsor Resolution 61/89 of 2006, the principal objective being to provide a legally binding international instrument for the trade in conventional arms.

â€œ We will continue to support all initiatives towards the realization of an Arms Trade Treaty in 2012. I call on all Member States of the UN to join in this endeavourâ€, said Jonathan.

The President President also called for a concerted global effort to tackle the problem of increasing piracy and other maritime crimes which he noted has had damaging effects on security, trade and economic activities in the Gulf of Guinea and other locations.

â€œIn this respect, I like to express support for the proposal of the Secretary General to deploy a United Nations Assessment Mission to under-study the situation in the Gulf of Guinea and explore possible options for UN support and action. Our expectation is that a positive outcome from such a strategy will not only benefit our sub-region but the larger international community as well. I am already consulting with other Leaders in our sub-region to boost this initiativeâ€, he said.

The President if reformed, the UN Security Council â€œwill benefit from the vigour and fresh perspectives which only a revamped Council that accommodated changing global political realities can provideâ€.