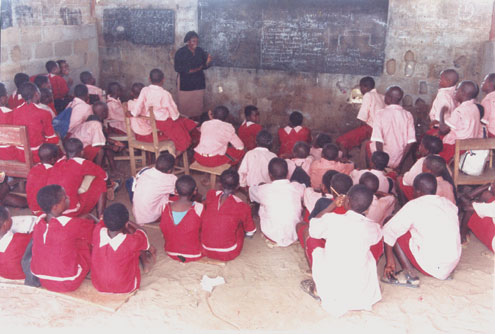 The environment in which knowledge is imparted must be conducive to enable the pupils or students imbibe anything. When learners are exposed to the elements, as our reporter discovered at Egan Junior Grammar School in Ikotun Igando Local Council Development Area of Lagos State, southwest Nigeria, it would take divine intervention for them to learn anything.

To put it correctly and without exaggeration, the school, established in 1993, is in danger of disintegration, and the lives of about 2,000 students is in danger.

Checks revealed that the structures in both the senior and junior schools are not fit for human habitation and may one day collapse, resulting in avoidable loss of lives and limbs.

When P.M.NEWS visited the school premises recently, it was discovered that the junior classes, especially JS1 and JS2 numbering about 1,000 students were receiving lectures simultaneously under a makeshift tent. A source disclosed that the students were moved from their former classrooms when it collapsed after the heavy downpour of 10, July 2011 which wreaked havoc havoc all over Lagos.

On sunny days, both the students and teachers carry umbrellas to protect themselves, right in the classrooms, because a storm had since blown off the roof.

Worse still, the JS3 students occupying the one-storey constructed by the Universal basic Education, UBE, were said to have been evacuated recently because the building is shaky and may collapse anytime soon.

Sometime ago, some angry parents had threatened to shut down the school but the Divisional Police officer in Egan, who appealed to the angry parents prevailed on them to drop the idea.

The DPO appealed to the parents to channel their grievances through the appropriate channel.

An unconfirmed source also disclose that the parents became angry when another block of classrooms collapsed and injured one of the students recently.

Before the planned protest, the Parents Forum Association of the school had written series of letters to fhe lagos State Commissioner for Education, the Deputy Governor and the Tutor General/Permanent Secretary of the concerned ministry.

A letter titled: Re-Abandoned Project at Egan Junior Grammar School, Egan â€“Approval For Voluntary Donations From Parents of E.J.G.S. dated 27, July, 2011, was sent to the Commissioner for Education.

In the letter, the Parents Forum sought the approval of the Commissioner to embark on a self-help project to assist the state government in repairing some of the classrooms, especially the fence, among other things.

The Forum also attached the letters sent to the Deputy Governor dated 15, October, 2009,

Photographs of the dilapidated buildings were also sent, whlie the efforts of the parents and the Joint CDA were detailed in the letter.

Speaking with P.M.NEWS recently, the Chairman of the Joint Community Development Association Egan-Idimu, Alhaji Jinadu Muse, said the condition of the school is growing from bad to worse and if something drastic is not done to salvage the situation, students may lose their lives if there is another heavy rainfall. â€˜The buildings are not habitable for students but we canâ€™t stop them as it is the only government secondary school that serves the entire community.â€™ Muse added that the CDA has done everything possible to call the attention of those concerned, all to no avail.

Also the Chairman, Parents Forum Association, Alhaji K. Kelani, disclosed that all efforts by the parents to get across to the government has proved abortive. â€™The situation in both Igando Junior and Senior Grammar Schools is a disaster waiting to happen.â€™he warned.