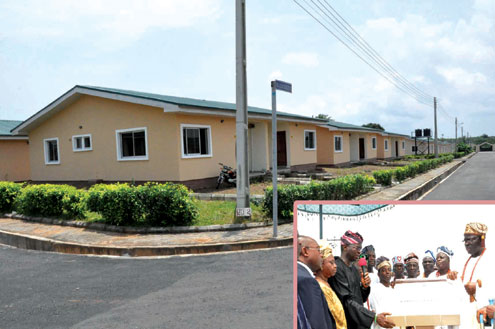 Over the years, housing has continued to be a major heartache in Lagos State, southwest Nigeria. With a population of over 18 million inhabitants, and with more people still trooping into the state on a daily basis, there is gross housing deficit in the state.

Unscrupulous landlords have capitalized on this over-bloated population to increase house rent annually since the demand for housing far outweigh the supply. The state government recently passed the tenancy bill into law to protect the interest of tenants in the hands of shylock landlords.

To curb the housing deficit in Lagos and ensure that more people own their homes, the administration of Governor Babatunde Fashola recently launched the Home Ownership Mortgage Scheme, HOMS. Fashola first announced the HOMS during his electioneering campaign.

During his campaign at Ibeju-Lekki, he first announced his readiness to â€œbreak the jinx of low cost housingâ€ by establishing a mortgage system that will afford low income earners a house for which they can pay on monthly basis over a long period.

However, the announcement received little applause compared to the ones given to the promise of Lekki Free Trade Zone, a fertiliser plant and refinery. According to some adherents of the Action Congress of Nigeria at the rally, low cost housing scheme sounds â€œtoo good to be believed.â€

He then announced that about 2,000 houses, which will serve as the take-off pool for the mortgage scheme, are already under construction, adding that the state government had acquired land in 12 different locations ranging between 30 to 400 acres. â€œTo own any of these houses, you will only pay thirty per cent of the one you like and complete the payment over 10 to 15 years,” Fashola had said.

“And as the mortgage business expands, the number of years will be extended to 25 years. But the house becomes yours the very day you pay the 30 per cent deposit. The houses will be given out on first come first serve basis. If you are number 101 on the payment list, you will wait until the 101th house is built,” he added.

With the launch of HOMS, the problems of housing in Lagos may be partially over. Fashola demonstrated his intention to make the HOMS work when he commissioned the Sir Michael Otedola Housing Estate on 13 September, 2011. The estate boasts of 362 housing units of one room, eelf-contain and two bedroom apartments.

â€œThis is the first of a series of those houses that have been completed and will immediately go into the pool of houses that will be available to the public for acquisition by mortgage or what people prefer to call rent to own,â€ he said.

During the commissioning of the estate, which was formally called Odoragunshi, Fashola said: â€œThe problem of housing was not that of building alone, it was also a problem of sustainability,â€ he said.

According to him, the problem manifested in various forms such as: port congestion which compounded the cost of imported components of building materials, foreign exchange rate which made prices of building materials fluctuate, absence of long-term mortgages, high interest funding available in the country, and the difficulty of repossessing houses from defaulting tenants which put-off investors from the housing investment.

â€œBecause we understood the problem, we decided to engage it methodically,â€ he explained, adding that the methodology started years ago when many critics thought he was dodging the problem of Housing in the state.

While his critics were having a field day, Governor Fasholaâ€™s administration was busy understudying different successful housing models, especially that of Singapore, which has several similar geographic similarities with Lagos.

Speaking at the launch of the HOMS, former Attorney General of the state, Olasupo Sasore, who is now the Chairman of Lagos HOMS said the model employed was a hybrid of social intervention and Public Private Partnership. He said the state government would provide land, infrastructure, and other incentives while the investors provided fund for the building.

According to him, this PPP arrangement ensured there was ample fund to build as many houses as possible, thereby eliminating limited budgetary provisions with governmentâ€™s involvement to ensure the prices were affordable. â€œIn fact, the state government is tasked with the valuation of the houses to assure that the project will not be exploited for excessive profit.

â€œTo further ensure that only low income earners access the mortgage scheme, houses purchased under the scheme must be occupied by the beneficiary and cannot be transferred or rented out until all obligations have been fulfilled. Each applicant will also swear to an affidavit that he/she has no other property in Lagos State. Other prerequisite are proof of employment, residency in Lagos State and evidence of tax payment.â€

Also, Fashola added that â€œany false deposition in the buyerâ€™s affidavit will be a ground for re-possession and this will be without prejudice to other criminal sanctions that may be imposed by law,â€ adding that three mortgage banks, FBN Mortgages, Skye Mortgages and Zenith Bank Plc had been nominated to administer the scheme.

And to eliminate lobbying, approval for each request resides with the management of the banks and not with the Lagos State government.

Fasholaâ€™s solution to the housing problem is one that also seeks to regulate tenancy and even envisage different disputes that may arise in the course of the transaction and has provided the Tenancy Law and Housing Arbitration Rules.

The Tenancy Law is one piece of legislation brimming with innovations designed to protect the rights of both the landlord and tenant. One good thing about this law is the fact that the offences therein are criminal offences and this will instill the fear of being labeled a criminal in the minds of prospective offenders.

For instance, the law stated that, â€œIt shall be unlawful for a landlord or his agent to demand or receive from a sitting tenant rent in excess of six (6) months (one year in the case of a new tenant)in respect of any premises.â€

It also provided that no sitting tenant will offer or pay rent in excess of six months and new tenants will not pay rent in excess of one year. Defaulters shall be liable to a fine of N100,000 or three months imprisonment. A fine of N250,000 or six months imprisonment is also provided for landlords found guilty of forceful ejection, while the stipulated length of quit notice applicable to different classes of tenants were also stipulated. Even the contentious monthly service charge is also regulated as landlords and agents are now mandated to provide receipts and provable records of how the fee is expended.

Already, there are evidences of compliance with this new law which took effect on August 24, when it was signed by Fashola. The advert boards of estate agents now demand one year payment instead of the usual two years.

The Housing Arbitration Rules has already been passed and adopted by the Board of the Lagos State Court of Arbitration.

Fashola said the Rules would guide the â€œresolution of the very foreseeable disagreements that are a permanent feature of human endeavour and commercial transactions.â€

Choosing arbitration as the sole means of resolving every dispute arising from Lagos HOMS transactions is another innovation that will ensure cheap and faster resolution of disputes.

According to him, cost of arbitration would not exceed two per cent of the purchase price of the property under dispute and this cost shall be borne equally by the parties. Also, in order to save cost, arbitration would be conducted by a single arbitrator â€œand in cases where it is appropriate, by the submission of documents only.â€

He emphasized that the preference of his administration for arbitration as sole means of resolving disputes under the mortgage scheme is not a â€œvote of no confidenceâ€ in the courts but the acknowledgement of the fact that not all disputes need end up in court, particularly those that can easily and lawfully be resolved in other ways.

â€œI am convinced that the operation of these rules will bring about the comfort and confidence that will inspire Lagosians to sign up for the Scheme when launched,â€ he stated.