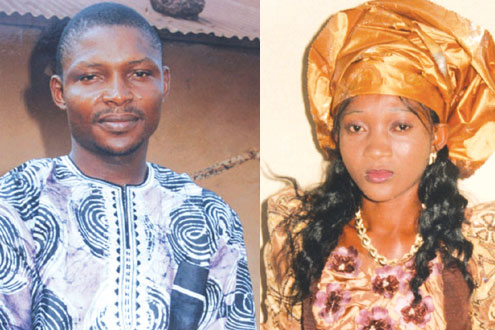 â€¢Yakubu arrested over death of Victoria and Victoria Akubo before her death.

The Criminal Investigation Department, CID of Nassarawa State Police Command, Lafia is questioning Johnson Yakubu, a taxi driver who plies his trade in Abuja on the murder of his fiancee.

The body of the deceased, 29-year-old Victoria Akubo, was discovered by the son to the coupleâ€™s landlord on Friday afternoon.

Explaining the circumstances in which the body was discovered, sources in the deceased residence at Catholic Church Road, One Man Village, a suburb of Abuja, Nigeriaâ€™s capital, told P.M.NEWS that the taxi driver who had left home earlier in the day called the landlordâ€™s son to help check on his fiancee since he has been trying unsuccessfully to get her on phone.

The landlordâ€™s son who also spoke to P.M.NEWS said he subsequently went to knock the door of the coupleâ€™s flat, but he did not get any response.

The landlordâ€™s son said he subsequently called Johnson back to inform him that there was nobody at their home.

But the taxi driver was said to have insisted that his wife is inside the house.

He asked the landlordâ€™s son to check inside the house through the other door that leads into the coupleâ€™s flat at the back.

Following Johnsonâ€™s instructions, the landlordâ€™s son told P.M.NEWS that he went to peep in through the window and saw the body of Victoria lying on the bed with her face covered with a pillow.

He said he entered the flat and discovered that the Victoria was dead with two marks indicating that she was stabbed in two places. The landlordâ€™s son said he consequently reported to the police. P.M.NEWS confirmed that the incident was reported at the local police station before the case was transferred to Lafia on Monday this week. It was gathered that Johnson, in his statement, tried to deny responsibility for the murder.

But the claim is being faulted by Victoriaâ€™s family.

It was learnt that Johnson had initially told the police that he left home around 8 am that day, but changed his statement later when he gathered that Mama Reuben had called Victoria around 6:12 am, indicating that the deceased was still alive as at then.

The same Mama Reuben told the police that she later went to see Victoria at their home around 7:30 am, but left after she repeatedly knocked the door without getting any response.

P.M.NEWS investigations also revealed that though Victoria and Johnson did their traditional marriage introduction ceremony preparatory to their wedding about two months ago, the deceasedâ€™s family did not approve of the marriage.

Also, neighbours of the couple at their former residence told P.M.NEWS that Johnson, an Igala from Kogi State, like his wife, is in the habit of beating and maltreating his wife to be.

Victoria, it was learnt, was admitted in hospital for some weeks recently as a result of such beating.

A younger sister of the deceased who was living with the couple claimed to have left in protest of the domestic abuse of Victoria.

Solomon Akubo, an elder brother of the deceased, said the family wants justice to be done on the issue even as he alleged that the police are trying to sweep the matter under the carpet.