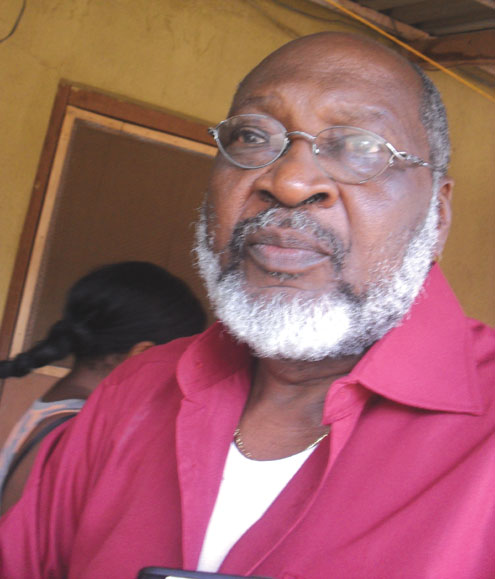 Uncle Taiwo, after your retirement, what have you been doing?

I have been doing training works in Broadcasting and also acting.

Why do you seldom act?

Because movie producers have not contacted me, but I know there is one kind of movie I will not act no matter what.

What kind of movie?

Anyone that will involve being diabolical. I mean going to consult a juju man in a film.

Is that why you have not been acting for long?

No, it is not so because not all Nigerian films have such plot or set but for whatever price, I will not act such role.

Why did you decide to act in the Burning Fire, an Akin Akindele soap?

Well, after reading the script and watching the past episodes of the soap running on AIT, with my relationship with Akin, I decided to act coupled with the fact that the role is not pertaining to asking me to go to juju man or a shrine.

Why are you scared of such roles?

I am not scared, even in play, I will not subject myself to any influence that is not godly let alone acting such a role.

What is your impression about Nigerian movies?

Well, there are different genres: Yoruba, English, and Igbo. To me, some of them are well acted. I like the effect used in them particularly in the Yoruba movie. Some of the plots are good and are well sorted out in the ones I have seen, In some other ones, I canâ€™t really say how the plots are being controlled. Of course, there is nothing new under the sun, so they might follow the same pattern but the creativity of the play writer is where one can expect the twist. Some of them show that they are good.

Which of the films do you normally watch?

The one I watch most now is the Yoruba film.

So what is your impression about Yoruba films?

What of the language?

What is your view about todayâ€™s broadcasting industry?

Because of the proliferation of todayâ€™s broadcasting, that is radio and TV and because of the hours, most of them are 24-hour stations, they need content to fill those hours. Definitely no station can fill those alone. They have to contact independent producers to give them contents but some of these producers cannot produce up to the required levels that the station can do on their own. So, they have to make do with the materials they have coupled with the fact that these producers bring sponsors to their production. So, they have little or no choice than to use their materials and these lower the standard of their productions but quite a few of the independent producers are good.

Also, some of the on-air personalities are not good enough, they donâ€™t usually meet the regular standard of these stations. Again, these should not happen because the broadcasting stations know the area they can get their people trained. There are people and schools that train on-air personalities like FRSCN School because they need to train them to increase the quality of their productions.

What happens to veterans like you? you are not being consulted?

Some are being consulted and I have also done some training for some people. And what I think is responsible for all these are the cost required by the trainers because they have to pay us not the kind of money we were receiving when we were in broadcasting because we are consultants and they have to pay what is commensurate with our services not like the time we were civil servants.

How was it then in your time?

I know that some stations like NTA used to send people for refresher courses by going to the TV College, Jos, then for training in different areas like producing, directing and others and people who were doing the job knew that they were doing it as a career, and to make a mark. So they are interested in improving themselves even if they were not sent for formal trainings. I did not get the opportunity to go for further trainings but I learnt on the job and anybody could do that and what they need is the interest on the job.

As at the time you left NTA, were you satisfied leaving the scene then?

I left the scene after spending the required 35 years in service and I felt fairly okay after moving from reporting and handling major OB Productions, such as the Obasanjo inaugurations. Iâ€™m about the sole anchor, so I feel satisfied.

Well, if I have not spent the required years, I would still like to continue.

What have been the ups and downs being a popular broadcaster?

I donâ€™t think there are any downs because any time I am recognised, that gives me joy as some people often go out of their way to say I have been seeing you or watching you on TV since I was born and these people are upwardly mobile people and others too. This is something that makes me happy and humble.

What about the financial records?

We were being paid like regular civil service salary. Nothing added to it though there are some parastatals that pay more than NTA. NTA was not paying much though people believe you are making more money by speaking with one president or the other. I say there was no other extra to it. I was being paid my salary.

What was your trademark then or what worked for you? Is it your personality or voice?

I will say my voice because a lot of people have said so. So I donâ€™t need any voice training and all I have been able to do was through my voice.

Do you give your voice a special treatment?

No, I eat and drink anything that comes my way.

How do you cope with the glamour then?

What about the women?

I married early before I got into broadcasting. So that stabilised me, not too much of women because I go night clubbing and I drink.

How do you relate with those that are bent on dating you?

I relate with people in a friendly manner, men and women.

What are we expecting from Taiwo Obileye?

Will you appear in more movies?

If they ask me to act, I will do but like I told you, they have not come to ask me to feature in their film.

Or is your price too high?

When they come, we will discuss.