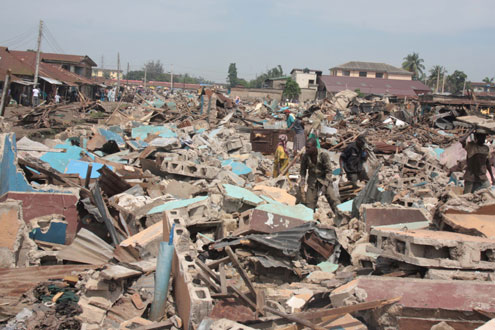 Â When residents of Odejobi Street, Agege, southwest Nigeria, woke up on Sunday, 2 October, 2011, they never expected that their houses would be demolished. But it happened. Shortly before 11 a.m., officials of the Lagos State Taskforce on the Environment and Other Related Offences (Enforcement) Unit struck. Kazeem Ugbodaga, Senior Staff Writer, who was at the scene reports.

Residents of Odejobi Street have continued to lick their wounds. There was commotion on the fateful day when officials of the Lagos State Taskforce on the Environment and Other Related Offences (Enforcement) Unit stormed the area with bulldozers to demolish about 25 buildings erected on a drainage channel.

On 10 July, 2010, a massive flood hit the area and due to the blocked drains, many houses were flooded while personal effects worth millions of naira were destroyed. Governor Babatunde Fashola had visited the area and seen that structures erected on drainage channels were responsible for the flooding and vowed to demolish them.

Residents of the street were, two weeks ago, served quit notices by the Lagos State Government while each tenant in the street was given N50,000 to relocate before the demolition axe descends on the area. Before now, residents in the street had yearly been victims to flood with properties destroyed, but they had continued to stay put in the place as a result of poverty.

After the state government gave each of the tenants N50,000, it directed the taskforce to demolish the area. The taskforce struck with its bulldozer on Sunday, 2 October, to carry out the demolition order. Some of the residents who got wind of the taskforce’s coming that morning quickly packed their belongings out of their houses.

Those who were still enjoying the Sunday were jolted by the the bulldozer’s appearance with a large number of taskforce men with guns to affect the demolition. They scampered to remove their belongings from their houses while the bulldozer immediately swung into action and began demolishing the illegal structures. Some officials of the taskforce used sledge hammers to demolish whatever escaped the bulldozer.

Some residents wept profusely as their houses were brought down. An old woman of over 80 years, Mrs Victoria Osho, who could not walk was later carried by a man on his back out of the scene.

She said she was taken unawares by the notice of the demolition, lamenting that she has nowhere else to lay her head. In fact, tears flowed freely that day.

Some of the tenants agreed that officials of the Lagos State Emergency Management Authority, LASEMA, gave them N50, 000 to leave the area and that they were given notice to vacate their houses as government would soon move in to demolish them.

A landlord in the area, Nurudeen Rasaq, lamented the development, saying that they were notified by the state government of the plan to demolish the structures, adding that the enforcement team did not stick to the earlier arrangement.

Responding to reports that the state government gave people N50, 000 to relocate, Rasaq said, â€œNone of the landlords here received anything, the people that received money here were tenants, and they were those that collected the forms when the government enumeration team visited. How much is even N50,000, more so, most of the landlords were not aware of the form in the first place, some had left for their various places of work; we only got to know about the money when they came to inform us from Alausa.â€

Some shopowners in the demolished houses said government did not give them N50,000 but that it was only tenants living in the houses that got the N50,000. One Muftau Opeloyeru claimed that his three shops were demolished but that he had already removed his wares from them. He admitted that they were given enough time to vacate their houses and shops before the demolition squad struck.

As the demolition was going on at Odejobi Street, shanties were being demolished by the taskforce at Abattoir. The Hausa community had erected shanties in the area near the railway at the Fagba axis. The taskforce moved in unannounced with their bulldozer to demolish of the shanties. The Hausa residents initially fought back, by setting the shanties ablaze themselves and spoiling for action.

A combined team of taskforce and military men, armed with guns dislodged them, paving way for the demolition. The Hausa residents watched helplessly as their shanties were being demolished.

One of the cattle dealers, who simply called himself Freeman, an indigene of Kano State, lamented the plight of the people, saying government was not fair by demolishing structures that provided shelter for low income earners.

â€œIt is unfair that government is sending us away from here without providing alternative for us. We are law abiding citizens and we voted enmasse for this government. The last time they came here to demolish our structures, in 2010, our leaders told us to go back to erect the structures again, but here they are today sending us out in this manner as if we are criminals, where do they want us to go now?â€ Freeman lamented.

Another cattle dealer, Mustapher, said an 80-year-old woman collected N10,000 from each of them to allow them to erect their shanties, saying that “the woman is nowhere to be found now and I have lost my shop to the demolition”.

According to Sanusi, another Kano indigene, â€œwe are here to survive and not to be useless. We have to look for our daily bread and they have to give us our rights. They came here with caterpillar to send us out; it is not war against indiscipline.â€

Taskforce Chairman, Supol. Bayo Sulaimon, who led the demolition squad on the exercise, said the directive was from the state Governor, Mr. Babatunde Fashola, following the flooding in the area on 10 July.

â€œAfter the visit of the governor on 11 July, properties sitting directly on the drainage channels were marked for demolition and the occupants were given a token to enable them relocate to other places. They were all duly informed about the demolition and we are here to carry out the demolitionâ€, Sulaimon said.

On the demolition of the shanties along the Agege rail line, he said it was important, following constant threats of the Boko Haram scare, adding that shanties in the area were first demolished early this year but the occupants returned to the area during the elections. He said the place could be an easy hideout for persons to perpetrate nefarious activities. A director in the Lagos State Ministry of Physical Planning and Urban Development, Mr. Adekunle Rufai, said Odejobi Street had been having flood problem for about four years, adding that houses in the area were usually submerged by water, thus, weakening the structures.

â€œThe Lagos State Government wanted to find a permanent solution to flooding in the area, and that has led to the demolition of affected structures. The structures have to go to pave way for drainage flow. We donâ€™t want lives to be lost; the building here are already distressed,â€ he stated.

Chief Executive Officer, LASEMA, Dr. Femi Oke-Osanyintolu said residents in the area were obstructing water flow as they erected buildings on drainage channels, adding that the state government was magnanimous enough to have given them a token to enable them relocate. â€œThe people there are obstructing drainage flow. They donâ€™t have approved plans for their houses, they are illegal occupants. Governor Babatunde Fashola was there to talk to them. Their safety is in danger and donâ€™t forget that they lost a 28-year-old man there in the last flood.

â€œWe gave them relief materials and a token to enable them pack their loads. About 343 people were enumerated during the four days exercise. At first, some of them did not put down their names because they thought we were not serious and went about their normal businesses. However, after giving them a token, some of them complained later and we ask them to put down their names through their baales,â€ he explained.