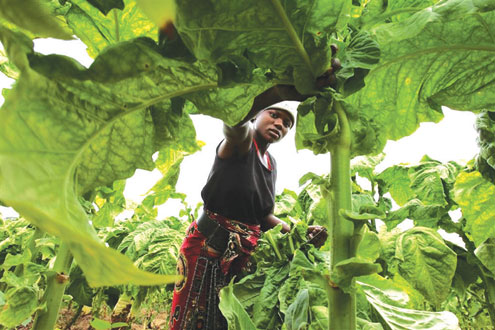 Since the nationâ€™s independence in 1960, agriculture had been the mainstay of the nationâ€™s economy, providing the largest chunk of foreign exchange inflow into the country.

Moreover, it contributed about 63 per cent to the nationâ€™s Gross Domestic Product (GDP), according to official statistics.

The incomes were derived from the export of major cash crops as rubber, cocoa, palm oil, cashew nuts, groundnut and cotton, among others.

Notwithstanding the low prices that agricultural products suffered at that time, the agriculture sector managed to strive on, continually sustaining the nationâ€™s economy.

With the dramatic shift of focus to crude oil exploration and the attendant oil boom of the 1970s, however, agriculture was displaced as the nationâ€™s main foreign exchange earner.

As a consequence, therefore, agricultureâ€™s contribution to the nationâ€™s GDP declined to 34 per cent, just as unemployment began to make an upward movement.

Dr Akinwunmi Adeshina, Minister of Agriculture and Rural Development, decried the decline in the nationâ€™s agricultural sector, lamenting that since 1975, the nation had become a net importer of basic food items.

The Minister said that agricultural productivity had fallen to its lowest ebb, compounding food insecurity, even though there was vast economic potential in the country.

â€œThen, the quality of life was good; children went to good schools, the nation was food sufficient but today, that has become history.â€

Prince Ubaka, National Secretary, All Farmers Association of Nigeria (AFAN) bemoaned the neglect of the agricultural sector, blaming it mostly on the discovery of crude oil.

According to him, the discovery of the crude oil lured many youths away from the farms into the cities in search of white-collar jobs.

Perceptive observers also say that sustenance of the agricultural sector had not been helped by the phenomenal growth of the mining and manufacturing sectors, which also attracted a large work force.

Professor Ayo Gbolohan, an agronomist, lamented that the decline in agriculture had been catastrophic for the country, especially as Nigeria, which once led the world in palm oil production had now become a major importer of vegetable oil since 1976.

â€œBetween 1970 and 1982, agricultural production stagnated at less than one per cent annual growth rate at a time when the population growth was between 2.5 to 3.0 per cent per annum.

â€œThere was a sharp decline in export crop production, while food production increased only marginally and this led to the augmentation of the domestic food supply through large imports.â€

Also sharing perspectives on the nationâ€™s agriculture since independence, Chief Rasheed Gbdamosi, an industrialist and former Minister of Labour and Productivity, said that it had become shameful that much of Nigeriaâ€™s food requirements were imported.

He also lamented that agricultural raw materials were not in such sufficient quantity as to effectively drive the nationâ€™s agro-allied industry.

â€œThe decline has been so nauseating that the groundnut pyramids of the north, the rubber plantations in the Edo axis, cocoa and kola nuts in the Western areas and other commodities have become things of the past.

The decline in agriculture notwithstanding, successive administrations at the federal level, had over the years, initiated various programmes aimed at redressing the drastic decline in the sector.

Agricultural analysts easily point to the Operation Feed the Nation (OFN) programme introduced by the erstwhile military regime of Olusegun Obasanjo in 1976, the Green Revolution programme under Alh. Shehu Shagari and DFFRI under Gen. Ibrahim Babangida.

Gbadamosi said that the OFN aimed to increase the number of the nationâ€™s farmers and raise the peopleâ€™s awareness of the key role agriculture played in an economy.

Observers recall that the fall in crude oil prices in the 1980s, which set the nationâ€™s economy on edge, somehow prompted the Federal Government to begin to rethink the vast potential of agriculture. This inevitably led to the idea of the Green Revolution.

With the benefit of hindsight, analysts say that the degree of success attained by the various programmes at different times, remains a matter for conjecture but suffice it to say that as at date, the nationâ€™s agriculture is still faltering.

The present administration under President Goodluck Jonathan, nonetheless, has reiterated its resolve to restore the nationâ€™s lost glory in agriculture, aside from the increased unpredictability of the worldâ€™s crude oil market.

Analysts say that expertsâ€™ prediction that the nationâ€™s crude oil could dry up in the next 50 years, has further underscored the necessity for the nation to go back to agriculture as the most dependable means of sustaining the nationâ€™s economy.

As if to reinforce such a prediction, Dr Olushola Lakunle, an economist, said that there had been concerns among stakeholders in the oil and gas industry over a Federal Governmentâ€™s revelation in 2010 that the nationâ€™s oil reserve had depleted by 3 per cent by the second quarter of that year.

Another source of worry had been an aspect of the 2010 MDG report, which stated that the proportion of Nigeriaâ€™s population living below the hunger threshold increased from 29 per cent to 33 per cent, between 2000 and 2009, implying little prospects of achieving the 2015 target of 14.5 per cent.

The report acknowledged that the average Nigerian family spent over 60 per cent of household income on food, while Adeshina also disclosed that a substantial segment of the nationâ€™s population earned below two U.S. dollars per day.

This, he said, indicated that Nigeriaâ€™s agriculture was not growing the economy as it should in the present times.

â€œThe nationâ€™s agricultural sector has not been driving the economy because the idea of a civil servant spending 75 per cent of his or her income on food is an indication that the nation is gradually eating itself into poverty.

â€œLooking at the GDP, the sector has been under-performing because the growth rate of 1.5 per cent in 2010 compared to other sectors of the economy is not too impressive.

â€œThe overall GDP growth of 6.1 per cent, the mining sectorâ€™s growth by 6.3 per cent, the energy growth by 4 per cent and 4.9 per cent for services sector shows that basically, agriculture is lagging behind.â€

Sen. Abdullahi Adamu, a former governor of Nassarawa State, described poverty as being very severe in the rural areas where more than 70 per cent of the populations lived, largely because of the neglect of agriculture.

â€œThey live below the poverty line, besides social services and infrastructure being very limited.â€

Mr Obasanjo Fasunla, an Agro-economist shared similar sentiments but stressed that the sectorâ€™s contribution of 45 per cent to the nationâ€™s GDP could be improved upon.

According to him, agriculture sector employs about two-thirds of the countryâ€™s total labour force and provides a livelihood for about 90 per cent of the rural population.

â€œNigeria is the worldâ€™s largest producer of cassava, yam and cowpea, all staple foods in sub-Saharan Africa.

He lamented that in spite of these, the nation still suffered food deficit in many areas.

Gbdamosi emphasised that now was the time for the nation to retrace its steps and put agriculture back to where it was in the 1950s and 60s.

He said that the sector had strong potential to create new job opportunities, financial freedom and security that would steer the minds of the youths away from mischief.

He underscored the need for stakeholders in the sector to see to the sectorâ€™s resuscitation soonest.

Alh. Aliko Dangote, Chairman of the Dangote Conglomerate, was very blunt, when he said that Nigeria had no other choice than to face agriculture.

â€œThat is where the nationâ€™s wealth and job opportunities are.â€

He decried the neglect of the agricultural sector for too long a time, emphasising that food self-sufficiency held the ace to the nationâ€™s economic recovery.

â€œWhether we like it or not, we must face agriculture; not only to sell and make money but to feed the nation because by 2025, the nationâ€™s population will be hitting over 250 million.â€

Alhaji Kabiru Rabiu, Group Executive Director, BUA International Limited, lamented that over half of the nationâ€™s arable land remained fallow as there were not younger hands for the nationâ€™s farms.

He tasked the three tiers of government, as well as the private sector, to join hands to train the youth, so that they could effectively replace the nationâ€™s ageing farming population.

â€œAll of us must be determined to make the youths interested in agriculture by making farming more attractive. This could be achieved through adequate investment in infrastructure in rural areas through the creation of â€˜remunerative economic opportunitiesâ€™ for young people engaged in agriculture.â€

Alhaji Olalekan Saliu, Executive Secretary, Flour Milling Association of Nigeria said there was need to reposition our priority as far as agriculture was concerned, stressing that the sector was in a very bad shape, which called for urgent attention.

He said that the urgency was underscored by the fact that agriculture remained the mainstay of the nationâ€™s economy, coupled with the fact that a sizeable proportion of Nigerians resided in the rural areas, where infrastructure was still very poor.

â€œGovernmentâ€™s basic responsibility to its people is to alleviate poverty and promote development and there is no other way of achieving these than by diversifying the economy, especially in the direction of agriculture.

According to Dr. Charles Ibe, National President, Nigerian Veterinary Medical Association (NVMA), the present administration should be very serious and determined to make the country food sufficient and secured.

He said that the nation had the potential for food surplus but had instead become one of the worldâ€™s largest importers of food, mostly rice, wheat and beans.

Adeshina revealed that the nationâ€™s food import bill between 2007 and 2010 stood at N98 trillion.

Agricultural economists say that such a huge expenditure on food importation is indeed mind-bogging, against the backdrop that the nation had vast natural and agricultural endowments, which had remained largely untapped.

Rabiu pointed out that such a development contributed to the growing food insecurity in the country.

Saliu added that mechanisation had also become imperative, so as to boost the volume of food production in the country.

Alhaji Abubaker Wodi, President, Rice Farmers Association of Nigeria (RIFAN) said that the absence of extension workers for effective utilization of modern farming skills was a major missing link affecting the growth of agriculture in the country.

He said that there had not been adequate extension services to both large and small-scale farmers in the country for some years now to boost agricultural productivity..

â€œGovernment has apparently deviated from the old concept of extension services to rural farmers as a means of ensuring effective transfer of technology, soil testing and monitoring of farmers in the rural areas, in order to bring research findings closer to the real farmers.

Rabiu urged the Federal Government to properly utilize the extension workers to achieve a new strategic direction for agricultural development as well as make a decisive response to emerging challenges.

Measures recently announced by the Federal Government to revive agriculture have been applauded by many, including Arosonyin, who said that there was a ray of hope of a viable transformation in the sector.

He asked for adequate funding of the sector, especially in research and extension services, so as to give meaning to the new agricultural drive to ultimately achieve industrialisation that was most crucial to eliminating poverty and crime in the society.