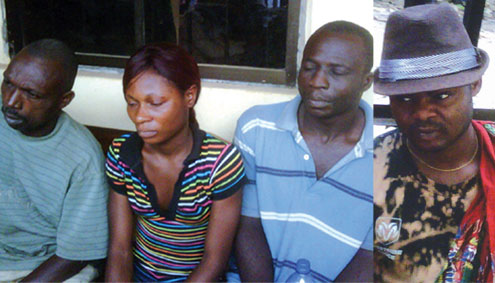 A five-man gang which abducted a 15-year-old girl, raped and tortured her for two weeks has been smashed by the police in Lagos, southwest Nigeria.

Although two members of the gang are still on the run, the police arrested three other members and a lady who lured the teenager to the gangâ€™s den at Akesan, a suburb of Lagos.

The suspects are to face trial at the Ikeja High Court after they were initially arraigned at Ejigbo Magistrateâ€™s Court.

The victim was abducted on her way to her house in Igando area and taken to a hideout.

She was tortured and raped for two weeks by five men before she was rescued by the police at Akesan.

After the victimâ€™s parents reported to the police at Igando station that the girl was missing, the police began to search for her and rescued her from a hideout where she was kept.

She sustained injuries on her body as a result of beatings by her captors, P.M.NEWS learnt.

The teenager is now receiving treatment at the Igando General Hospital.

The suspects arraigned are Tony Igbo, 32, Onyekachi Joshua, 34, Paul Ibeh and a 22-year old woman, Chika Eze, the victimâ€™s friend who allegedly lured her to where she was abducted.

The four suspects were charged to court with conspiracy, abduction, assault and rape.

When the matter came up at the court, they pleaded not guilty.

The presiding magistrate, Chief Magistrate Shery Solebo, ordered that the matter be transferred to High Court Six, Ikeja, Lagos where they will face the charges preferred against them by the police.