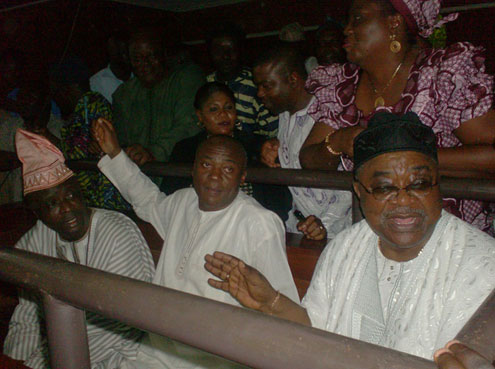 Akala (r) and others, granted bail.

Justice Moshood Abass of the Oyo state High Court, today granted bail to the former Governor of the state, Otunba Adebayo Alao-Akala; deputy Senate Whip, Hosea Agboola; and an Ibadan-based contractor, Olufemi Babalola.The trio are standing trial before the court over alleged conspiracy and looting the state treasury and illegally acquired property preferred against them by the Economic and Financial Crimes Commission (EFCC).Legal teams of the anti-graft commission and that of the accused persons have, on Wednesday, slugged it out before the presiding judge over the bail applications filed on behalf of the suspects.The legal firework which took the whole of Wednesday was concluded with the ruling delivered by the judge.

The judge found merit in the application and admitted them to bail accordingly.For the former governor, the court gave a bail condition of N500 million, with two sureties in like sums.He also said the two sureties must have landed properties in the Government Reservation Area (GRA) in Ibadan and must swear to affidavit of means.

Senator Agboola and Babalola were granted bail in the sum of N300 million each with one and two sureties respectively in like sums. The sureties, like the case of Alao-Akala, must possess landed properties in Ibadan GRA and also swear to affidavit before the court on them.

The judge also fixed hearing of the charges against them for 13, 14 and 15 of December, 2011.While giving reasons for his granting the bail, Justice Abass said that he picked hole in the arguments of the EFCC against the applications.

For instance, against the claim of the commission that the former governor did not provide enough evidence to support his claim that he needs constant access to his doctor and observe his routine medical checkup, the judge said the medical report from his doctor and the personal testimony of Alao-Akala was convincing.

Also, he said the fact that the accused person is no more the governor of the state and that he does not belong to the party in power means that his freedom would not in any way influence the course of justice.On the two other accused persons, the judge said he was convinced that since they had appeared before the commission seven times each for interrogations and written statements on the allegations against them, it shows that they are ready to produce themselves each and every time they are needed for further questioning and for the prosecution.In its opposition to the bail applications, the EFCC legal team, led by Godwin Obla, had prayed the court to reject them, arguing that none of the applicants provided enough evidence to back up their claims.

The accused persons were arraigned on Tuesday on an 11-count charge of alleged corruption.Immediately they were granted bail on Thursday, their supporters burst into jubilation. Some were seen at the court premises singing.Also some supporters of Alao-Akala protested victimization of Alao-Akala carrying placards of different inscriptions to say that Alao-Akala is innocent of the suit filed against him.

Reacting to the ruling, Alao-Akala said he thanked God for allowing him to reclaim his fundamental human rights of freedom of movement. He told reporters that he would be through in the next 10 minutes as people who would fulfill the bail for him and others were already within the court premises.