â€œWe Have Restored Hope To Our Peopleâ€, Says Fashola 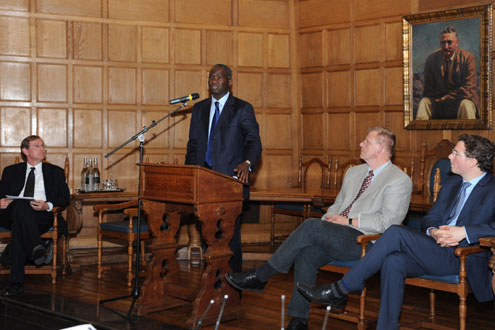 â€œWE HAVE RESTORED HOPE TO OUR PEOPLEâ€, SAYS FASHOLA AT OXFORD UNIVERSITY LECTURE

Lagos State Governor, Mr. Babatunde Fashola (SAN), Monday at the Oxford University in United Kingdom said his administration has restored hope which has become the most important building block for constructing the future to the people.

Governor Fashola, who spoke on the theme Managing a Mega City at the special Oxford Research Network on Government in Africa (ORENGA) lecture at the Rhodes House, Oxford University , London , said in the last four years, his Government has succeeded in changing the attitude of the people from that of loss of faith in government to voluntary cooperation in governance.

The Governor noted that because of long years of neglect and deprivation the values of hard work, integrity and honesty were greatly eroded giving rise to societal vices and economic downturn adding, however, â€œHope has been restored and it has become our most important building block for constructing the futureâ€.

According to the Governor, as a result of the great political upheavals of the 1980s and 1990s, Democracy was curtailed and investment was stalled while there was absence of new infrastructure to keep pace with the demands of the growing population in the country adding, â€œfrustration set in, hope was diminished and many of the brightest and the best emigrated to other countriesâ€.

â€œI recall that the first set of professionals to leave were the medical doctors out of frustration about their inability to function in hospitals that had no power supply and their unwillingness to continue to watch patients lose their lives in circumstances that were clearly avoidableâ€, Governor Fashola said.

He noted that during the difficult years of the 1980s and 1990s, there were many physical signs of decline such as poorly maintained roads which were increasingly clogged with traffic, schools where class sizes became too big for even the best of teachers to manage adding that the most important change was the attitude of the people.

â€œIn the 1960s and 1970s, there was a spirit of optimism. People looked forward to their city becoming steadily better- to their lives becoming more prosperous- to thier ambitions being fulfilled, their talents properly used. They looked out for each other. And they valued integrity and honesty. There was a culture of hard work and the dignity that came with industry. That spirit became erodedâ€, the Governor said pointing out that the military who took over government in the 1980s and 1990s were not trained to manage by persuasion and debate.

Explainin that what the country needed at the time â€œwas a government based on freedom and rooted in ideas in which they could participateâ€, Governor Fashola declared, â€œIn this new millennium, we in Lagos have turned another corner. And when I became Governor in 2007, I determined that we would fully recover the attitude which I remembered from my own young years in the 1960s and 1970sâ€.

â€œI was convinced that the quickest way to achieve a turnaround was to persuade people, especially the professionals and our brightest brains, about the nobility and values of public service and secondly to restore hope to our people that all was not lost and that everything was possibleâ€, the Governor said adding, â€œI think I can say very confidently that those two objectives have been largely realizedâ€.

Giving details of this feat, the Governor further declared, â€œOur Government in Lagos State has the record of being the most efficient in the country today because of the quality of personnel it keeps and continues to attract from within and outside the countryâ€.

â€œIt has the highest record of budget performance in the public sector of not less than 70 percent every year since 2007 and the people of Lagos have found a new reason to believe again and they speak of their State with a lot of pride a can-do spiritâ€, he said.

Some of the areas of priority, Governor Fashola said, include the Environment where refuse has practically disappeared from the streets and the State is now recognized as the cleanest in the country, Transportation where the system is being fixed with new taxis returning to lend support to the public transport system and an intra-city rail transport which is underway as well as the return of night life as a result of improved security as well as Housing, Security and Healthcare, among others.

â€œIn the past three and a half years, as a city-state, we have built more roads than two of our neighbouring countries â€“ Ghana and Sierra Leone and the need is yet to be fully satisfied because of our populationâ€¦. The rickety old yellow buses are becoming a thing of the past. We now have a fleet of over a thousand new buses, driven by a team of 1,200 professionals, many of whom have returned from overseasâ€, the Governor said.

He also noted, â€œWe are simultaneously constructing an intra-city rail system, the first phase of which will run for 27 kilometres. We are also constructing a Free Trade Zone in Lekki which will be serviced by a deep-sea port and an adjacent airport and when it is finally fully built, it may end up being the biggest free trade zone in Africa â€“four times the size of Manhattan â€.

He said Government has also tackled the challenge posed by the need for availability of affordable housing for the expanding population adding that in the pursuance of this, Government is developing a comprehensive mortgage scheme to make more residents home owners while also it has enacted a new tenancy law to protect the rights of tenants and landlords.

On how his administration overcame the challenge posed by the breakdown of values on which the society was originally founded or what he referred to as â€œmental infrastructure of the peopleâ€, Governor Fashola explained, â€œWe decided to pursue the old well beaten path; to return to hard work, to plan, to pursue diligently and with belief in our abilities; to seek knowledge wherever we could find it, to compete against the best, to set very high standards and never be afraid to failâ€.

â€œWe are not there yet. But with the commitment of the very talented and hard-working team who support me, we are doing our best to bring on the change that the majority of our people now feel is within touching distanceâ€, the Governor said adding that he does not mind being described as a technocrat if it means commitment to efficiency and to getting things done. â€œAnd there is certainly room for that kind of commitment in Nigeria â€, he added.

Underscoring the importance of time management which, according to him, â€œhas become like a religion â€, Governor Fashola continued, â€œBut being a technocrat is not enough. You have to have a vision as well. And our vision is firmly rooted in those values which I have outlined and which we are determined to pass on to the new generation of Lagosiansâ€.

He expressed joy that his administration has revived uniformed voluntary organizations like the Boysâ€™ Scouts, the Boys Brigade, the Red Cross and others in the Stateâ€™s public schools in order to inculcate in the young ones the values of service, teamwork and leadership which these organizations have been known to teach young people.

â€œ Lagos is a city-state of young people. We mirror the demographic profile of Nigeria as a whole. About 70 percent of the population of the country is below forty years old. It means we have the qualities of youthfulness, energy and enterprise that any developing nation requires. It also means that there is a good proportion of people in the workforce earning money and paying taxes to support those who have retiredâ€, Governor Fashola said.

Expressing appreciation to the international community for their partnership in dealing with the aforementioned issues, Governor Fashola thanked particularly the Department for International Development in Britain adding, â€œTodayâ€™s event in this beautiful hall is just the latest example of the close co-operation we have enjoyed with the British people and their Governmentâ€.

â€œYes, we are proud to be Lagosians and Nigerians, but we are not inward looking. We value international contacts and particularly the chance to trade internationallyâ€, the Governor said recalling that this year alone like in the recent past the State has hosted such high-ranking British public officers like Prime Minister David Cameron, Minister of State for Immigration, Mr. Damian Green and his International Development counterpart, Mr. Andrew Mitchell as well as the Lord Mayor of London, Alderman Michael Bear.

lnviting the British Government and investors to look toward Lagos and Nigeria for huge investment opportunities, Governor Fashola declared, â€œ Nigeria as a country and Lagos as a State offer huge opportunity to British investors. I also look forward to partnership in areas of Education and I am hopeful that a university like Oxford can develop a partnership overseas with our state university and offer the same quality or training and certification in an institution based in Lagos â€.

Thanking the University for the Invitation, Governor Fashola noted that in a global community such as the world has become, countries as diverse as the United Kingdom and Nigeria share many of the same problems adding, however, that no matter the low public perception of politics he believes that it is an honourable calling.

â€œThe greatest honour that anybody can have is the opportunity to serve the people. I admit the role can be exhausting. But the rewards are immense â€“ when you can see the difference that your policies are makingâ€, the Governor said adding that one of such rewards that go with his role was the chance to come to places like the University of Oxford â€œto exchange views with people with great interest and a wealth of knowledge about Africa like yourselvesâ€.

The lecture delivered to a capacity audience at the historically rich Cecil Rhodes House engendered a lively interactive session with the audience comprising lecturers, scholars, research fellows, graduate and undergraduate students asking questtios on a wide variety of issues including leadership vision, public private partnerships, health, education, water supply and even the role of new media in governance. The Commissioner for Waterfront lnfrastructure Development, Prince Adesegun Oniru, his Education counterpart, Mrs Olayinka, Oladunjoye, the Commissioner for Finance, Mr Tokunbo Abiru and the Special Adviser on Public and Private Partnerships, Mr Ayo Gbeleyi, accompamnied the Governor to the lecture.

Earlier, while congratulating the Governor for a stimulating lecture, the Warden of Rhodes House and Secretary of the Rhodes Trust who co-ordinated the event, Dr Donald Markwell noted that themes of of leadership, service, and international cooperation, addressed by Governor Fashola were similar to the values of the Rhodes Scholarships, which in the past had brought a number of great personalities and talented Nigerian students to Oxford .