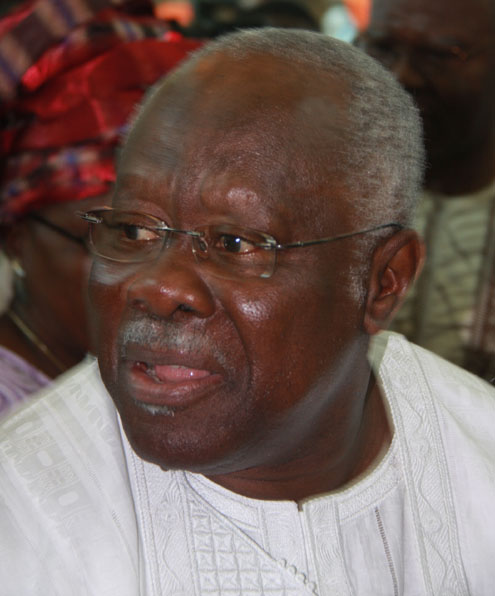 The Lagos State chapter of the Action Congress of Nigeria, ACN, has described the former Deputy National Chairman of the Peopleâ€™s Democratic Party, PDP, Chief Olabode George as a soiled blackmailer that will never be allowed to cart away Lagos for his selfish political interests.

The party was reacting to Georgeâ€™s recent interview where he claimed that his party won most of the local governments in Lagos but was denied victory by the Lagos State Independent Electoral Commission, LASIEC.

Publicity Secretary of ACN in Lagos, Joe Igbokwe described Georgeâ€™s reaction as a clever means by him to stave off the allegation by a faction of the PDP that he misused the funds given for the party by the national PDP.

ACN described George as a soiled and desperate man that is not fit to lead any political party.

â€œWe are not surprised that instead of answering to the damning allegation by Adeseye Ogunlewe that he misappropriated the N50 million war chest released by his partyâ€™s national headquarters to do the impossible job of winning Lagos councils after the grand failure in April, Bode George is trying to advance very outlandish and ludicrous claims that the PDP won most of the local councils in Lagos during the local government elections recently.

â€œThat Bode George continues desperately to paint LASIEC and ACN in bad light and has refrained from proving his claims in court show that he is a finished blackmailer that lives on petty gossips and trading on falsity for political gains.

â€œWhen Bode George and his co-revelers realized they had failed woefully again during the last council election, and felt that organizing stage-managed demonstrations was the best way to get what he never earned, we asked them to go to court since he said he and his party had clear evidences of being rigged out in the election.

â€œThis was before Ogunlewe revealed that George collected huge sums of money for the election from Abuja and merely pocketed it and never worked for the success of his party but merely waited to make spacious claims and employ this to organize demonstrations, claiming that he miraculously won Lagos,â€ it stated.

According to ACN, â€œWe wonder why Bode George, and his party are refraining to go to court with the hefty evidences they claim to have gathered and we are left with no option than to re-state that Bode George, to whom honour means little, is now fully stuck in the most infantile blackmail for puerile political gains.

â€œAs we maintained when this childish game was going on, PDP knows it has no evidence for losing elections in a state it had never won any election in its entire history but hoped that by alleging rigging, they will get some concessions for offices they donâ€™t deserve.â€

â€œWe want to let Bode George know that he had to win Lagos on fair terms and not through threats and blackmail. We want to let him know that Lagos voters are the most sophisticated in Nigeria and know where their interests are best served.

â€œThey can neither be commandeered nor blackmailed as the PDP and Bode George think but can be persuaded to support any political party that best meets their aspiration. He should quit playing the childish game he is indulging in at present and face reality, which is that with his well known soiled personality, he cannot lead any party to electoral success in Lagos.â€