Curbing The Okada Menace In Lagos 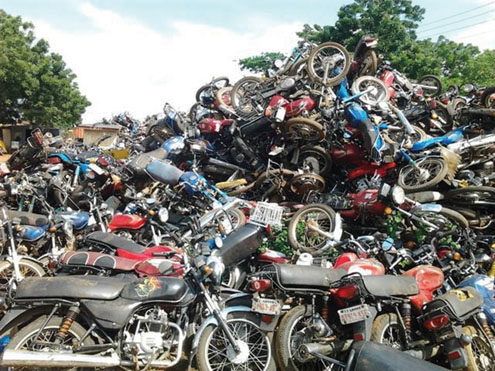 In the last few weeks, the Lagos State Government has decided to take the bull by the horns to curb the excesses and menace posed by commercial motorcyclists in Lagos, southwest Nigeria. Governor Babatunde Fashola has vowed to stop at nothing to ensure that okada riders comply with standards or stop the business. Kazeem Ugbodaga writes.

After an emergency news conference recently, the Lagos State government decided to clamp down on commercial motorcyclists, otherwise known as okada who have taken the city by the jugular in terms of lawlessness and brazen violation of traffic laws. Governor Babatunde Fashola has ordered the Ministry of Transportation to swing into action and enforced the laws governing the operation of motorcyclists in the state.

It is a known fact that over 70 per cent of okada riders in the state do not obey traffic laws and ride recklessly, many times against the flow of traffic to the chagrin of all. Several accidents have occurred as a result of okada riders riding against traffic.

Last week, Fashola kick-started the crusade against okada lawlessness and personally apprehended many of the riders to serve as deterrent to others. Security operatives are now on the alert to arrest okada riders who flout the laws.

One of such culprits who was arrested by Fashola is Mr. Goodluck Omodion, who decided to drive against traffic at Akowonjo area of the Lagos metropolis. Omodion decided not to obey the law and his impatient and brazen act of lawlessness was halted by the governor himself.

Luck ran out on him following the directive of the state government that no commercial transport operator should drive or ride against the traffic again. He flouted the new directive, and the 32-year-old okada operator was held at Akowonjo roundabout alongside his erring colleagues. The security operatives consequently impounded their motorcycles.

Just last week, nemesis also caught up with okada riders and kombi bus drivers who drove against traffic when Fashola personally led his team to arrest several of the offenders to demonstrate the political will to enforce the law. The motorcyclists, who were apprehended for riding against traffic on the Apapa Bridge include Mr. Haruna Umaru with motorcycle registration number FS 820LG and Mr. Idris Isa who was caught driving against traffic from Ijora to Apapa. Others include Mr. Sani Buba with motorcycle registration number Z 315 LSD who claimed to be the Vice Chairman of Motorcycle Operators Association of Lagos State (MOALS), Victoria Island Chapter.

The governor led the team that made the arrests after commissioning a 60-flat Housing Estate built by the Lagos State Development and Property Corporation (LSDPC) at Apapa. He expressed profound concern about the difficulties encountered by residents of Apapa, saying the situation in the area was exacerbated by okada riders, trailers and tankers.

He hinted that a policy was in the offing to address and deal decisively with the problem, adding that what the people experience here â€œis a failure of agencies of the Federal Government to do their work and they manage the port at the expense of the lives of the residents.

â€œJust recently, it was announced that N188 billion was generated from this port. But the question is: How much of it was spent on Lagos? How much of it was committed to or spent on building railway tracks and trains that will evacuate cargo from the Port? This is unacceptable.â€

â€œAs I have said to all those who care to listen, if okada is a problem to you, stop using it; because it is a business and if you donâ€™t patronize it, it will leave you alone.â€ The state Taskforce on Environmental and Special Offence Unit warned the operators that the enforcement â€œwill continue on daily basis. It is not done in our office alone.

â€œAll police divisions in the state are also carrying out the enforcement daily. We may be unable to stop the unlawful acts of okada riders but we can reduce it. Some people find it so difficult to obey the laws of the state. Look at the 10pm ban. When anyone visits our yard, he will think we are motorcycle dealers because of the number of Okada we have arrested,â€ he added.

â€œYou will see my next line of action in the fullness of time, but I think ultimately Lagosians must have to decide whether or not they want okada. But in the meantime, they have to comply with our rules and if they don’t, they will have the law enforcement agencies to contend with. We will not allow this incessant and sheer disregard for our laws; those who cannot comply should leave our state,â€ Fashola fumed.

The state government last week insisted on the full implementation of restrictions placed on their operations in selected areas of the state including all bridges and dual carriageways among others.

Commissioner for the Environment, Mr. Tunji Bello addressed a briefing at the state secretariat along with his counterpart, Mr. Kayode Opeifa of the Transportation Ministry, stating that the state government had adopted non-custodian sentence for any resident found guilty of environmental nuisance.

The commissioner mentioned the rationale for okada restriction to include, “riding without the use of crash helmets and on the medians as well as walkways, disobedience to traffic rules and regulations and traffic signal lights, operating on highways and in prohibited areas whenever they wanted. The operators have not changed from these illegal actsâ€.

Bello stated that motorists and okada riders had thus cultivated the habit of driving against traffic; exhibiting in the process, wanton disobedience of traffic lights/signals. He added that the state â€œis now witnessing shameless acts of open defecation and urination in public places.â€

â€œThe state environment has been distorted through indiscriminate erection of bill boards, callous act of littering and trampling on beautified sites by okada riders. We wish to emphatically state that okada is not an approved means of commercial public transportation in Lagos State.

â€œLagos State government more than any other state of the federation has been very tolerant of the menace posed by its operation for socio-economic reasons. More than 800,000 motorcycle riders are currently operating in the state apart from dispatch riders. If we are not tolerant, the operators could not have been as many as this,â€ he said.

He therefore warned all okada operators carrying pregnant women; school age children; women with children on their back to refrain from the practice or face prosecution, adding that the state government â€œwill start applying non-custodian sentences by making offenders to wash public toilets in the full glare of the media.

â€œLaw Enforcement Agents especially LASTMA, KAI and the Nigeria Police have been directed to ensure zero tolerance. Government is seriously disturbed with the rate at which motorcycle operators flagrantly disobey the law and have no regard for the safety of other road users.â€

Mr. Bayo Suleiman, the taskforce chairman, said security operatives â€œare out there enforcing traffic rules and regulations. We do not victimise any person. We only go after erring operators, who fail to observe the directives of the state government. We will not allow any violation of the state law or activities that impact negatively on our society.â€

He confirmed that a good number of motorcycles, whose owners violated the state law, â€œhave been impounded. I cannot tell the number of motorcycles already apprehended because it is difficult to count. But what we have decided to do is that we will not release any okada we arrest again. We discover that arresting and releasing them has made the law ineffective.

â€œThe state government will decide what to do with the motorcycles later. When time comes, the state will decide. If we tell owners of the motorcycle to pay fine now, some will believe we are more interested in the fine and not the corrective measure. But when they are deprived of their motorcycles, they will learn to obey the law of the state,â€ he said.

Since the commencement of the clampdown on okada riders last week, over 230 were impounded in one day.

The government, after due consultation with the relevant okada associations, decided to give the riders a grace period which lapsed last Sunday and began massive enforcement on Monday in all affected zones.

General Manager, LASTMA, Engr. Babatunde Edu said aggressive enforcement had begun and that over 230 okada riders had been arrested so far, adding that the enforcement shall be total. He lamented that several criminal activities had been perpetrated through the use of okada by men of the underworld.

Rising from the State Security Council meeting last week, the Deputy Commissioner of Police (Operations) Mr. Tunde Sobulo also disclosed that a new policy on commercial motorcycles is on the way, to deal with errant riders who still disobey government rules and regulations on the operation of commercial motorcycles on the stateâ€™s roads.

According to him, â€œokada riders are still giving us problems. They are still riding against traffic and carrying two to three passengers and without helmet. Majority of the culprits are those that are not members of the motorcyclistsâ€™ union. There is nothing to identify them with. But I believe there is going to be a policy soon and when it is out we will know how to deal with them.â€