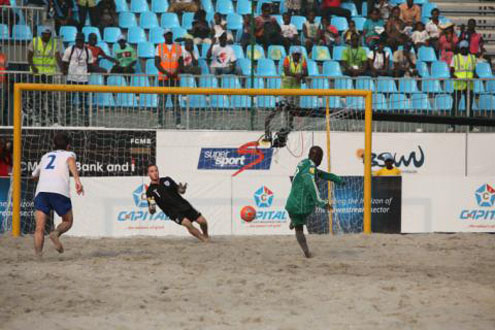 It will be a clash of the titans as the favourites at the maiden edition of the Copa Lagos Beach Soccer, Brazil take on the hosts,Â  Nigeria’s Super Sand Eagles to determine the winners of theÂ  tournamentÂ  in a deciding last game at the Eko Atlantic City on Sunday.

The Sand Eagles and the Kings of the Beach, as the Brazilian team are fondly called,Â  are tied on six points apiece and go head-to-head on the final day of the tournament for the winning prize.

On day two of the four-team tournament on Saturday, Reis Da Praia (another name giving to Brazil) outclassed their South African counterparts by 9 â€“ 3.

In this game Benjamin Silva proved a handful for the South Africans and inspired his teammates to grab the competitionâ€™s biggest win so far.

On Friday, the South Americans had overcame the English by 6 â€“ 3.

In the second game of day two at the Lagos beach, Nigeriaâ€™s Super Sand Eagles continued their 100 percent run in the tournament to set up a final day showdown against Brazil.

The Sand Eagles lived up to their favouritesâ€™ toga by defeating England 5 â€“ 2 in the fourth match of the competition on Saturday.

The Nigerians raced into an early lead through Victor Tale and missed a spot kick, which the English goalkeeper Sam Webb kept out.

Seconds later, captain Isiaka Olawale doubled the lead for the Sand Eagles before Azeez Abu made it 3-0.

Olawale was on hand again to complete his double of the evening as the Englishmen fought back to trim the scoreline to 4 â€“ 2.

But it was Babatunde Badmus that put the game beyond England with a spectacular finish to ensure that Nigeria win by 5 â€“ 2.

The South Africans will play against England by 2pm, before the final clash between Nigeria and the former world champions.