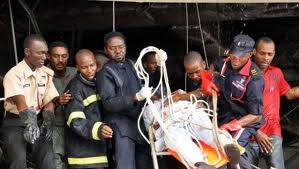 Christmas celebration in Nigeria was marred by bomb blasts which claimed scores of lives across the country on Sunday. The first bomb blast was at St. Theresa Catholic Church, Madala, a suburb of Abuja, Nigeria’s Federal Capital Territory.

Eye witnesses indicated that the bomb exploded in a car at the churchâ€™s parking lot. There was also indication that one of the bombs was thrown from a moving car towards members of the congregation leaving the church.

PM NEWS observed that some members of the church were burnt to death right inside their cars.
Decapitated body parts littered the expansive church premises and crowds gathered around the burnt cars starring at charred remains of people who just left the church minutes ago inside their burnt out cars.

The situation in the area was very tense as at the time of writing this report as there are fears that members of the church may embark on reprisal attacks in the area.

Youthful members of the church took their anger out on some policemen and journalists. The youths were particularly angry that such attacks can still occur despite the fact that there was a police checkpoint nearly adjacent to the church.

Estimates of casualties from the blast so far ranged from 10 to 25, with many others reported injured.

Yushau Shuaib, spokesperson for National Emergency Management Agency (NEMA) confirmed the bomb attack which according to him, occur on Sunday morning as the Catholic Church was holding its
Christmas mass.

He also confirmed that at least 10 people have been confirmed dead as a result of the attack, though he added that the number of casualties may rise. He added that rescue efforts is being hampered by lack of adequate ambulance: “Yes, I can confirm to you that there has been a bomb blast in a church in Madala.

“We are presently there, evacuating the dead and the injured, but unfortunately we don’t have enough ambulances. Most of our ambulances have gone to operate on the major highways of the country,” he added.

The second attack was at regional office of Mountain of Fire and Miracles Ministries church that a bomb exploded Jengre Road in the troubled city of Jos.

Islamic militant group, Boko Haram has already claimed responsibility for the Madala blast. The sect had carried out similar attacks targeted at churches in Jos last year.
recent bombings have been linked to the dreaded Islamic sect Boko
Haram.

The militant sect had indicated that it will carry out attacks during the Christmas period.

The Christmas day attacks follow clashes between Boko Haram members and men of Nigerian security forces in Maiduguri, Borno State and parts of Yobe State in the past few days.

“There was a major encounter with the Boko Haram in Damaturu. We lost three of our soldiers, seven were wounded. But we killed over 50 of their members,” said Ihejirika.