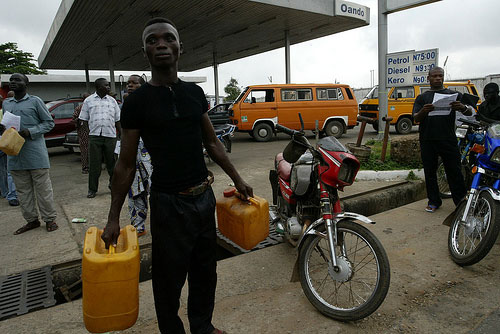 The Action Congress of Nigeria (ACN) has re-stated its opposition to
the plan by the federal government to remove fuel subsidy, saying the pains that the action will inflicton Nigerians who are already reeling from the effects of bad governance will far outstrip whatever ‘gains’will accrue therefrom.

In a statement issued in Lagos on Tuesday by its National Publicity
Secretary, Alhaji Lai Mohammed, the party said the clarification of its stand on the issue becomes necessary in view of the insinuation by the government’s propaganda machinery that it has secured the support of 40 political parties for the subsidy removal.

”The government should state the 40 political parties it met on this issue. By the Grace of God, our party is the largest opposition party in the country today. We have not expressed support for the removal of fuel subsidy.

”We remain on the side of the people. We feel their pulse and their pains. We believe the removal of fuel subsidy is a great misadventure, and have conveyed our stand on the issue in a
letter to the President, though we never got a response,” it said.

ACN also wondered what a government is elected to do, if it is now tying the provision of infrastructure to the removal of fuel subsidy.

”President Jonathan did not tell Nigerians, during his electioneering
campaign, that his administration will only be able to deliver the dividends of democracy by removing fuel subsidy. Therefore, it amounts to arm twisting the people to say
that funds saved from fuel subsidy removal will be used to construct roads, build hospitals and schools and other expectations from the government. The government should have been honest enough to say it is seeking ways to raise money for governance, and Nigerians would have been glad enough to let it know how to raise money without resorting to a phantom fuel subsidy removal.

”Our message to the President is that if he feels he cannot explore
other areas to raise money for development, like cutting down on government excesses, then he should say so clearly and leave the stage for those who can ensure development with minimal pains. Our party, the ACN, will provide good governance without removing fuel subsidy, and
we are ready to do so today if the Jonathan government cannot,” the party said.

It repeated its earlier statement that what the government is claiming to subsidize is corruption and inefficiency, adding that unless refineries are repaired and built to refine enough products for local consumption and the NNPC is revamped to function more efficiently, no amount of fuel subsidy removal will end the current reign of the so-called cabal.

”There will always be a cabal in the oil sector for as long as local production cannot meet demand, and the government resorts to importation. This also applies to other sectors. Therefore,
the best way to deal with the cabal is to ensure enough local refining of oil.

”With the knowledge that even if all the local refineries are working at full capacity, they may still not meet domestic demand, we have suggested that the government should build modular refineries. This does not require rocket science. After all, Niger
discovered oil only a few years ago and now has a refinery,” ACN said.

The party also took the federal government to task on its claim that
whatever hardship is inflicted by removal of fuel subsidy would be short-lived, wondering if at all the government even knows the kind of pain it will inflict on the citizenry by its fuel subsidy
misadventure.

”Does this government know that the moment the so-called subsidy is removed, food prices will triple; cost of transportation will shoot sky-high; health care will be further impaired; mortality rate will go up and the country’s ability to achieve the Millennium
Development Goals will be affected?” it queried.

ACN said despite the government’s so-called consultations with
stakeholders, the way its propaganda team is carrying on suggests that
the removal of fuel subsidy is already a fait accompli.

But the party advised the government to tarry a while, desist from its
divide-and-rule tactics against labour and the opposition, provide
answers to critical questions like whether or not the NNPC even
accounts for the 445,000 bpd of crude it receives, what is the current
refining
capacity of the functioning local refineries and how much fuel is
being refined locally, what does the NNPC do with the balance, what is
the ex-refinery cost of the fuel refined in Nigeria and how much is it sold for.

”By the time these questions and others are answered, the government
will no longer be under any illusion that it is subsidizing fuel and
that what it needs to do urgently is to ensure that the country can refine
enough oil to meet local consumption, and in turn stop the exportation
of technology, jobs, growth and expertise that goes with crude oil export,” ACN said