Okada: Lagos Itching to Act, Gets its Report 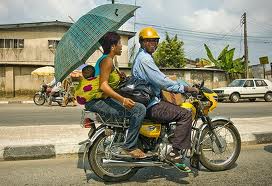 The Lagos state government will anytime from now impose measures to tame the â€˜security problemsâ€™ that commercial auto-cycling, otherwise known as okada, has created. Whether the government will impose an outright ban on its use as a mode of transportation in Nigeriaâ€™s leading commercial and industrial centre is uncertain yet. But hints that some far reaching measures will be taken, were dropped by the chairman of the panel government had set up to advise it.
In a speech that was a mirror-image of the Governorâ€™s catalogue of the socio-economic and security menace of the commercial auto-cycling at the setting up of the panel weeks ago, the panel chairman also dwelled on the many sins of the transportation mode, which Lagosians now heavily rely on to move around.
Waheed Kazeem, a retired deputy inspector-general of the police and chair of the panel, recalled that commercial motorcycle operation has never been officially recognized in the State but has evolved overtime due to socio economic reasons to become a mode of transportation for the people.

â€œEconomically it has become a lucrative business for its operators who have in turn become very reckless and impossible to organize with flagrant disregard for law and orderâ€.

He said the committee also discovered that undue influence and interference is always brought on law enforcement agents by some influential people thus thwarting attempts to enforce the law. He said because majority of the commercial motorcycle operators are migrants from other states who have no accommodation or shelter before coming into Lagos State, they have constituted nuisances in several other wise peaceful neighbourhoods.

â€œBetween January and November 2011, 492 robberies were committed by commercial motorcyclists while in the month of November alone, 79 armed robbery cases by okada operators were reportedâ€. He said 1,908 commercial motorcycles were apprehended in October for traffic violations while in the last two months of October and November 179 cases of accidents were recorded at the Lagos State University Teaching Hospital (LASUTH) Ikeja with 170 of them being passengers on okadas.
He said records at the Accidents and Emergency Centre at the Lagos Ibadan Toll gate showed a total of 41 cases of Okada accidents between the same period while in the 20 General Hospitals across the State 1,039 accidents cases were reported on Okadas.
Lagos State Governor, Mr. Babatunde Fashola (SAN) had the recent security problems in the nation, on his mind as he received the report, seizing the moment to appeal to Lagos citizens to be vigilant at all times and to report all suspicious movements and strange occurrences to the security agencies.
According to the Governor, â€œIt is very essential that in terms of vigilance we must increase the power of observation. We must be able to say details like colour of face of a particular person, his height, shape and other characteristicsâ€.

â€œThe members of the Neighbourhood Watch must remain vigilant to notice and report unusual happenings and occurrences in the various communities which may signpost major problemsâ€, Governor Fashola charged adding that his administration would do its best to ensure that lawful people in the State go about their businesses without any let or hindrance.