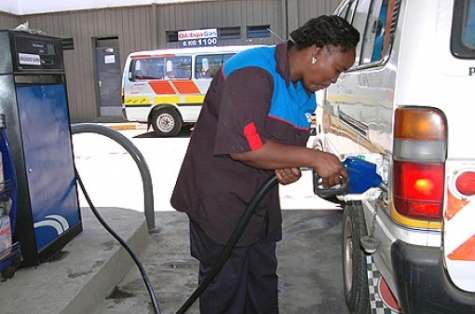 Despite strong opposition from labour unions, civil society groups and other interest groups, the Federal Government, in what many are likely to consider a bizarre New Year gift announced the removal of subsidy on premium motor spirit, popularly known as petrol on Sunday.
Reginald Stanley, Executive Secretary, Petroleum Products Pricing Regulatory Agency, PPPRA announced the removal in a statement in which he also informed that petroleum products marketers will not be paid subsidy for any product discharged after 1 January.
The PPPRA helmsman added that petroleum marketers are now to procure products and sell same in accordance with the indicative benchmark price to be published fortnightly and posted on the PPPRA website.
PM NEWS checks of indicative benchmark data on the PPPRA website put the current cost of petrol minus the subsidy at N141.00 as at 29 December, 2011.
Thus, Nigerian petrol consumers are expected to start buying petrol at this price with the announcement of the end of subsidy regime today. Federal Government had argued that over a trillion naira being presently spent on subsiding petroleum products annually is unsustainable and denying the country funds that could have been used to invest in badly needed infrastructure and on other areas.
Government had also argued that removal of subsidy will encourage investments in the downstream sector of the oil industry, especially in the building of refineries.
Government also argued that sure way of ridding the process of petroleum importation of corruption, which many have argued was responsible for the ever increasing subsidy claims is to totally remove government agencies from the process.
But the labour unions and members of the civil society group as well as the preponderant majority of Nigerians opposed the move with arguments that the removal of subsidy will further impoverish Nigerians as it will lead to a general rise in the price of goods and services.
They also argued that if government tackled the corruption associated with process of petrol importation and revive the perpetually comatose four refineries owned by the country, the amount being spent on subsidy will be much lower than the current figure.
However, an indication that Government has decided to go ahead with the policy emerged when President Goodluck Jonathan refused to allocate funds for subsidy payment in the 2011 budget proposal he presented to the National Assembly some weeks ago unlike in the previous years.
Nigeria state chief executives had also supported the move to end subsidy on the premise that the policy will result into more funds accruing into their coffers to tackle the various challenges confronting their states.
But before todayâ€™s surprise announcement, many include some government officials had indicated that the policy of subsidy removal may not take off until April 2012. Labour has already indicated that it will oppose the move.
The full statement issued by the PPPRA on the removal of subsidy reads:
â€œFollowing extensive consultation with stakeholders across the nation, the Petroleum Products Pricing Regulatory Agency (PPPRA) wishes to inform all stakeholders of the commencement of formal removal of subsidy on Premium Motor Spirit (PMS), in accordance with the powers conferred on the agency by the law establishing it, in compliance with Section 7 of PPPRA Act, 2004.
â€œBy this announcement, the downstream sub-sector of the petroleum industry is hereby deregulated for PMS. Service providers in the sector are now to procure products and sell same in accordance with the indicative benchmark price to be published forthnightly and posted on the PPPRA website.
â€œPetroleum products marketers are to note that no one will be paid subsidy on PMS discharges after 1st January 2012.
â€œConsumers are assured of adequate supply of quality products at prices that are competitive and non-exploitative and so there is no need for anyone to engage in panic buying or product hoarding.
â€œThe PPPRA in conjunction with the Department of Petroleum Resources (DPR) will ensure that consumers are not taken advantage of in any form or in any way.
â€œThe DPR will ensure that the interest of the consumer in terms of quality of products is guaranteed at all times and in line with international best practice.
â€œIn the coming weeks, the PPPRA will engage stakeholders in further consultation to ensure the continuation of this exercise in a hitch-free mannerâ€, the PPRA boss concluded.