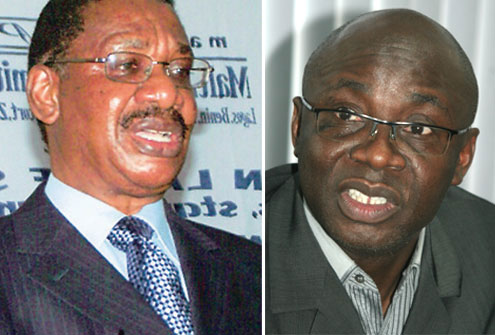 Prominent Nigerians, Prof. Itse Sagay, Pastor Tunde Bakare, Balarabe Musa and others have called on Nigerians to join the Nigeria Labour Congress, NLC, in mass protest against the removal of fuel subsidy and hike in prices of fuel.

Speaking with P.M.NEWS today, Sagay said the removal of the fuel subsidy by the Goodluck Jonathan government was cruel and must be resisted by Nigerians through mass protest.

He said what the Federal Government had done was to give Nigerians a bad New Year gift, saying that the government was very deceptive by deceiving the nation that it would not remove the fuel subsidy until April, only to turn around a remove it in the New Year.

â€œWhat the government has done is to give us a bad New Year. This government is built on deceit; nobody can trust this government again because it has no regard for the masses. It is a very depressive New Year for me.

Fiery preacher, Pastor Tunde Bakare said the Save Nigeria Group, SNG, is currently strategising on how best to confront the government on the removal of fuel subsidy.

â€œIt is not fuel subsidy but fuel absurdity. The president wants to impoverish the Nigerian people. We foresaw the danger coming but we must rescue our nation from this clueless government,â€ he stated.

Former Kaduna State Governor and National Chairman, Peoples Redemption Party, PRP, Balarabe Musa said mass protest is the option to get the government to change its stance, saying that â€œthis imperialist guided, unilateral, vulgar and mindless withdrawal of oil subsidy by the president of Nigeria has opened wider the floodgate of anarchy under the circumstances.

â€œUnfortunately, the president, who is so dependent, does not have the executive capacity and moral base to control and redirect the negative situation. Under this circumstance, civil society organisations, led by political parties and workersâ€™ organisations and the National Assembly should take immediate action to restrain the president and control the situation leading to normalcy and legitimacy.

â€œWhoever among them starts taking corrective action should be joined by others immediately with the objective of the equivalent of the Arab Spring but qualitatively and historically even better.â€

Elder Statesman, Ayo Opadokun backed the NLC for mass protest against the removal of fuel subsidy, saying that until Nigerians stop the opportunistic collaboration with the government at the centre, they would not be taken seriously.

Founder, Coalition Against Corrupt Leaders, CACOL, Comrade Debo Adeniran also called for mass action against the government, saying that the removal of the subsidy was fraudulent.

â€œThis removal is fraudulent. It is a confirmation of the reason for the distrust the society has in the administration that they are agents of imperialism by worsening their plight. The masses should rise up and protest this injustice,â€ he said.

National President, Campaign for Democracy, CD, Dr. Joe Okei-Odumakin appealed for total and effective paralysis of activities nationwide, saying that the unbearable prices were clear signal to the suffering people of Nigeria that if there â€œis no mass uprising that shakes Jonathanâ€™s administration to its foundation, it would continue to inflict pains that would eventually kill them off.

â€œThe time to be complaining in our bedrooms is over; Tunisians and Egyptians were not complaining in their bedrooms, they were ready to make sacrifices against their tormentors.â€

According to her, â€œNigerians should be ready for a long drawn battle and not a hundred metres dash because we are dealing with an insensitive administration. Let us all rise as a people and give this administration an overdose of the peopleâ€™s action so that Jonathan will never again think of riding roughshod over us.

The Campaign for Democracy appeals to labour not to be deterred and show the impressive leadership it has always given to the people in terrible times like this.â€

Speaking, Barrister Monday Ubani, who spoke on a radio programme this morning, said President Jonathan had pushed Nigerians to the wall with the declaration, saying that the entire country would become too big for the President to handle judging from the anger that had pervaded the entire country, while declaring support for any action that would be taken by organised labour.

A Lagos lawmaker, Rotimi Olowo, declared total support for whatever action the NLC, Trade Union Congress, TUC and other civil society groups would want to take in the next few days.

He explained that the President negated the constitution as issues that have direct impact on the people of the country must be left to be deliberated by the National Assembly.

â€œBut in this case, the National Assembly is on recess and the President was not through with consultations with stakeholders before throwing the New Year day bomb,â€ he said.

According to him, the Minister of Petroleum, Diezani Alison-Madueke, had told Nigerians that the four moribund refineries were undergoing maintenance, but that this was not concluded before the government went ahead with the subsidy removal.

He said he was sure that two-third of Nigeriaâ€™s local consumption of the product was being refined in the country, â€œyet, the President has decided that the product be sold at international price.â€

From his argument, the Presidency should have tried to balance both local production and those imported into the country and then reduce the price by sharing same among the marketers since not all of them import fuel.

â€œAre you now telling me the government refines locally at international rate? What will happen to the average Nigerian? It would erode our naira and cause serious inflation. I wholeheartedly support the organised labour because power belongs to the people and it is derived from them,â€ he stated.

He because of the failure of governmentâ€™s responsibilities to its people, Nigerians now provide their own water, electricity, healthcare and roads.

Comparing Nigeria with other developed African countries, he asked: â€œare you saying we should just fold our hands? Where is the money saved through Paris Club? What happened to the $800 million allocated for the construction of rail lines from Lagos to Kano?

â€œIf we donâ€™t come out and fight our cause, who will fight it for us?â€ he asked, while advising that in the course of the struggle, Nigerians should not resort to violence.

Chairman, Lagos House of Assembly Committee on Information, Olusegun Olulade, said he was in support of protest but said it should degenerate into violence, adding that protests were legal tools that should be used to press home grievances.

He also condemned what he described as the inhuman treatment meted out to Nigerians by the president, saying that â€œwhile Nigerians are scared of a bomb blast on New Year day, they didnâ€™t know that the greater bomb would come from their own president.

â€œIt is unfortunate and bad. We must believe in the Nigerian project and exercise our rights against the Poverty Development Party, PDP. We should all go out and let the world know that we reject this in totality,â€ he said.