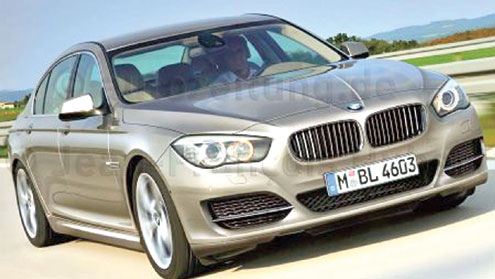 BMW is to ship 4,000 brand-new luxury vehicles in from Germany to escort dignitaries and officials in a move described as â€˜lunaticâ€™ by critics. The enormous fleet will include more than 3,000 BMW 3 and 5 Series saloons. However, traffic should not be a problem for the VIPs who will cruise along specially reserved â€˜games lanesâ€™ near the venues. The Olympic vehicles will be shipped into Britain from BMWâ€™s factories over the next six months. BMW has donated the fleet as part of its sponsorship deal with London 2012. The firm will sell the cars after the Games on the second-hand market.

Despite heralding its green credentials, BMW has admitted that only 200 of the 4,000 vehicles will be electric cars. The transport deal â€“ worth in total an estimated Â£150million â€“ will also include 400 bicycles and an unknown number of motorcycles. A BMW spokesman said: â€œWe were chosen by the London Organising Committee for the Olympic and Paralympic Games based on our ability to provide a fleet of diverse vehicles which could meet the 120g/km CO2 emissions threshold as set by them. However, a substantial proportion of the fleet will be the diesel models. The fleet of vehicles which we will supply will achieve this threshold and the Games will provide the perfect opportunity for us to showcase our efficient diesel and electric vehicle technology.â€