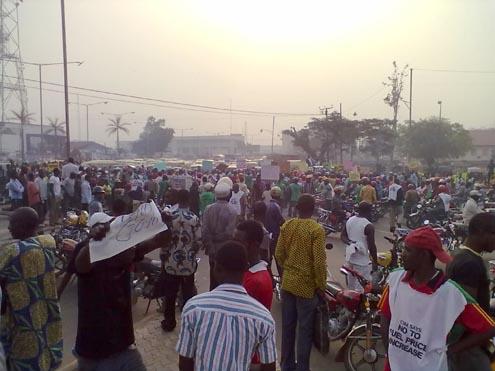 The protesters against fuel subsidy yesterday in Benin City.

Protesters in their thousands this morning took to the streets of Benin City, Edo State capital, Southsouth Nigeria to express their anger over the removal of fuel subsidy.

The protest which paralysed economic activities in many parts of the city, was organised by a group known as Coalition to Save Nigeria, comprising United Action for Democracy, UAD, Coalition for Women Group, Live Above Poverty Position, Nigeria Medical Association, African Network for Economic Justice, Nigeria Union of Journalists, NUJ, Academic Staff Union of Universities, ASUU and the Coalition of NGOs in Edo State.

Chairman of the group, Dr. Phillip Ugbodaga, who also the State NMA Chairman, urged the people to resist the price hike, stressing that whoever failed to resist the hike has accepted death sentence through poverty, impoverishment and second enslavement by political leaders.

Ugbodaga gave a graphic detail of fuel price increase from six kobo per litre during Gowon era to the N65 per litre which was adjusted to N141 on 1 January.

Also addressing the protesters, Mrs. Sabena Idowu Osegholo, leader of Live Above Poverty group condemned the latest fuel price hike, describing it as a punitive measure against women in Nigeria.

In a letter addressed to the President, the coalition urged President Jonathan to reverse the price of petrol to N65 per litre immediately. It also advised him to restore the refining capacities of the refineries.

The group sought drastic reduction in the cost of governance in Nigeria, and also urged President Jonathan to reject the World Bank and International Monetary Fund policies.

â€œIf the Federal Government fails to revert to the old price of N65 per litres, Nigeria will have no alternative but to fight for their rights, in the next few days,â€ the coalition said.

The protesters set up bonfires on the streets and roads, impeding movement of people and vehicles.

They also displayed a mock coffin of the Federal Government and placed it at Kingâ€™s Square, Benin City.

Armed mobile policemen were trailing the protesters to forestall a breakdown of law and order at the time of filing this report.

Also this morning, residents in their hundreds this morning trooped to the streets of Abeokuta, capital of Ogun State, Southwest Nigeria, to stage a peaceful protest against fuel subsidy removal by the Federal Government.

The protesters, under the aegis of Action Committee of Professionals and Nigerian Students, were led by a lawyer and activist, Barrister Mutiu Agboke.

The protest which commenced at about 7 a.m. took off from Panseke junction, Abeokuta. The protesters moved to Ibara road, up to Oke Ilewo where they stopped briefly at Iwe Iroyin House, the Secretariat of the Nigeria Union of Journalist, NUJ, Ogun State chapter.

They later moved towards Isale Igbein, down to Sapon area where they linked Ijemo road to Ake Palace. They met with the Alake of Egbaland, Oba Gbadebo Aremu.

He warned them not to allow hoodlums to hijack the protest.

â€œI commend you for this peaceful conduct. I promise to present your plight to the state council of obas as the chairman. I enjoin you to send your letter to the governor in Oke Mosan for onward transmission to Abuja,â€ the monarch said.

The protest caused a serious traffic gridlock on major roads in the city.

Some of the inscriptions on the placards carried by the protesters read: â€˜Remove corruption, not fuel subsidy,â€™ â€˜Jonathan, this must stop,â€™ and â€˜No to fuel subsidy removalâ€™.

They also distributed flyers which condemned the subsidy removal.

Speaking with P.M.NEWS, the leader of the group, Agboke said the protesters will no relent in their opposition to the fuel subsidy removal.

He said: â€œThe government action is anti-people and anti-democracy. The PDP-led Federal Government has been suffering the people. The protests will continue until government reverses the fuel hike.

â€œBefore government can talk of removing fuel subsidy, it should fix the refineries, ensure regular supply of electricity and provide important infrastructure.â€

Addressing the protesters, Ogun State Governor, Senator Ibikunle Amosun commended the peaceful conduct of the people. He promised to send their letter to President Jonathan in good time, adding that he also feels the pains of a gloomy economy like the protesters.