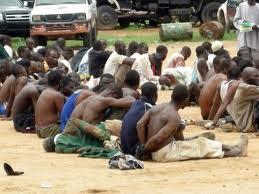 Twelve worshippers at the Christ Apostolic Church in Yola, Adamawa State were killed last night when gunmen, suspected to be members of the Boko Haram, attacked the church.

P.M.NEWS gathered that 11 of the worshippers died instantly while the twelveth died in the hospital from bullet wounds.

Non indigenes of the town, it was gathered, fled their homes in the night when they learnt of the killing and sought refuge at the General Jalo Army Barracks, Yola.

The unknown gunmen, who rode on motorcycles, entered the church and opened fire on the worshippers. Several members of the congregation sustained bullet wounds during the attack, witnesses revealed.

Five members of the church are in critical conditions at the Specialist Hospital, Yola, the report disclosed further.

Twelve mourners were also killed last Friday in Mubi, the commercial nerve centre of the state by suspected members of Boko Haram.

They were killed while holding a meeting on how to raise money to convey home the remains of three of their relatives earlier shot dead by members of the sect on Thursday before they were attacked.

The Police confirmed the incident, saying investigation was ongoing.

The state Commissioner of Police, Mr. Simeon Midenda also confirmed the killing of an SSS operative in the state. The operative was shot dead in Biu after returning from the mosque where he went to pray. Biu is one of the 15 local governments in the country placed under emergency rule by President Goodluck Jonathan.

Meanwhile, chieftains of the People’s Democratic Party, PDP, including former President Olusegun Obasanjo and former vice president Atiku Abubakar, yesterday, campaigned for the re-election of Governor Murtala Nyako of Adamawa State despite the nationwide strike called by labour over the recent increase in petrol price and the killings in the state. The rally witnessed a large crowd despite the strike.

Obasanjo, in his message, condemned the killings by Boko Haram in the state, saying, “Adamawa is one of the states in the country that encourage inter-religious friendship among residents irrespective of where they come from.”

On his part, Abubakar said the election was as good as won because “PDP is a multi-party and will win the election because all other political parties will vote for PDP, the party they all belonged to before now.”

Streets in Maiduguri were deserted as all government and private businesses were grounded although there were no anti-subsidy removal protests.

The absence of protest was attributed to the already tense situation created by the activities of Boko Haram.

NLC Chairman in the state, Mr. Ali Abana, expressed satisfaction with the situation as most people in the state fully complied with labour directives by remaining in their homes instead of doing anything that would further jeopardise the relative peace in the state.