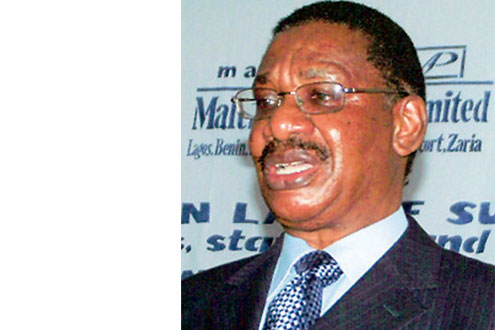 Constitutional lawyer, Prof. Itse Sagay, elder statesman, Pa Ayo Opadokun and others say the ongoing strike must be sustained until President Goodluck Jonathan and his cohorts revert fuel price to N65 per litre.

They were happy that the strike had begun on a good note, saying that the fact that the House of Representatives had asked the president to revert to the old price did not translate to suspending the strike.

Speaking with P.M.NEWS this morning, Sagay said there was no way the ongoing strike should be suspended until the government sees reason to revert to the old price for petroleum product.

“The strike should not be suspended until the government reverts to the old price, which is N65 per litre. We fully support the ongoing strike,” Sagay stated.

Also speaking, Opadokun backed he ongoing strike, saying labour must sustain it until the government reverted to the old price, while he commended the House of Representatives for its stance on the matter.

“The strike must go on. The Senate should also pass the same resolution. The executive should obey the resolution of the House of Representatives. Since it is the executive arm that imposed hardship on Nigerians by removing fuel subsidy, the strike should go on.

“The government of the day is not a listening one. It is a shame that government insists on basing the policy of fuel consumption at home on importation. Government should ensure that we don’t import fuel again,” he said.

Founder, Coalition Against Corrupt Leaders, CACOL, Comrade Debo Adeniran, said the strike had been very successful and that the people were willing to sustain it until the Federal Government succumbs to the demand of the people for total reversal to the old price.

Afenifere leader, Reuben Fasoranti said the strike should continue and must be sustained until the government bowed to the people’s demands.

On the Boko Haram menace, he called on the government to take a bolder step to eradicate it once and for all.

Also speaking on the subsidy removal, the Senior Pastor of Daystar Christian Centre, Pastor Sam Adeyemi has asked the Federal Government to put the needed infrastructure in place before its removal.

Pastor Adeyemi gave this admonition yesterday during the church service, adding that the level of dishonesty and corruption in Nigeria, particularly among the elite and government officials has plunged the nation into this mess.

“If they were honest, may be subsidy would not cost more than N200-N300 billion annually. They should attack the corruption in the oil sector from the licensing of importers by PPPRA to the recording of the figures for imported fuel. There are dishonest people in government, ministries and agencies who inflate contract figures ten times and approve non-existent projects for payment. They will consume the money saved from subsidy,” he said.

He said the price of fuel per litre should be reverted to N65.

Adeyemi urged the President Goodluck Jonathan to wage war against the corruption in the oil sector and other sectors. He said massive construction of at least two new refineries’ should begin immediately.

He stressed that, “as to the claim that PMS is used only by the middle class, it shows the disconnect between the elite in government and the common man. The ‘I-better-pass-my-neighbor’ and small power generating sets used in millions of homes and small businesses use petrol. So do most of the taxis and buses that ferry the masses. Increase in fuel price by over 100% has had a direct and instant impact on the lives of most Nigerians.”

Pastor Adeyemi, however, urged the citizens not to play into the script written by the devil. “We need to pray for our country more than ever before. Someone might wonder ‘pray? No. This is the time to protest. This is an acceptable point of view because as citizens we have the right to speakout. However, I see two scripts playing out in our country presently; one written by God and the other written by satan. And people are acting out the scripts; especially satan’s script without knowing, that is why we need to pray and be very sensitive at this point in time just to be sure we are acting out God’s script because that will be the best for the country”.

He asked Nigerians to pray for God to unravel those behind the Boko Haram attacks.

The Association of Nigerian Authors, ANA, has also decried the removal of the subsidy at a time discussions on its viability or otherwise have barely been exhausted.

In a joint statement by Prof. Remi Raji-Oyelade, president of ANA, and B. M. Dzukogi, the general secretary, the writers’ union said: “It is clear that Nigerians, who are the purported beneficiaries of the exercise, have expressed fear not only on the implementation strategies but also on the genuine realisation of the expected development of the critical infrastructure of the country.

“Their concerns, which are built on previous failures of past leadership, are genuine and valid. We note that at times, certain decisions, however unpopular, are taken by government on behalf of the people who entrusted in them the power to act for the country on both its internal and external affairs.

“However, at all times, both leaders and the citizenry must be seen to have exhausted alternative avenues for peaceful resolution in avoidance of unnecessary conflicts and hardships. As a body, our concern is the potential this action has on education, literacy and book development initiatives in the country.”

ANA further stated: “As writers, authors and intellectuals who have had to contend with the lack of accessibility to publishing infrastructure due to years of neglect, this subsidy removal may be counter-productive to the development of creative writing in the country.

“We note that in the list of palliative designed for the subsidy removal utilisation plan, nothing addresses book development. We contend that a society bereft of idea-generation and documentation is a society receding into underdevelopment. We hereby urge government to define the strategies and institute structures that will include a clear direction for book development and a conducive literary culture in the larger interest of Nigerians.

“We, the National Executive Council of the Association of Nigerian Authors hereby call on the Federal Government to reopen discussions with the Nigerian people by immediately reversing its removal of fuel subsidy until such a time when all parties have exhausted negotiations and agreed on this very sensitive matter.

“We urge the Federal Government to listen to the majority voice of well-meaning Nigerians as a way out of the current impasse. The Association of Nigerian Authors also calls on the youth and our members to avoid being exploited to foment trouble, and to refrain from actions that will further complicate the general security of the country.”