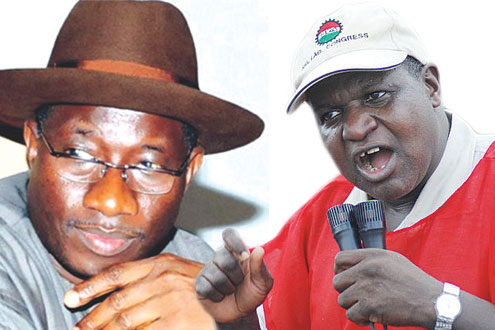 Nigerians took to the streets in their thousands today nationwide as the rally organised by Occupy Nigeria entered its third day.

The protests have continued in most parts of the country even as the Federal Government and organised labour continued with the dialogue to resolve the crisis over fuel subsidy removal.

In Lagos, southwest Nigeria, labour leaders and protesters were today shut out of the Teslim Balogun Stadium and the National Stadium, both in Surulere. But that did not dampen the spirits of the protesters who trooped out in large numbers.

As armed security agents manned the gates of the two stadia and turned back protesters, labour leaders addressed the protesters at the open space in front of the national stadium.

They said, from the unfolding events, Petroleum Minister, Mrs. Diezani Alison-Madueke and Mrs. Ngozi Okonjo-Iweala are not fit to hold public offices in Nigeria because they are anti-people.

He thanked the protesters for their cooperation.

Salako urged President Goodluck Jonathan to learn from the mistakes of African leaders like the late Colonel Muamer Gaddafi of Libya.

A rights activist group, Campaign for the Defence of Human Rights, CDHR, advised the police and other security agents to see the protesters as their brothers and sisters who are fighting for the cause of liberating Nigerians from wicked rulers.

Chairman of CDHR, Comrade Ishiaq Una, said the group will not tolerate any further killings of the protesters who are making legitimate demands.

The group described the removal of fuel subsidy as a wicked action, saying the government should avoid leading Nigeria into the type of crisis that rocked some Afro-Arab countries, by listening to the voice of the people and revert to the N65 pump price of petrol, from the current N141.

Alhaji Ibrahim told P.M.NEWS at Jibowu while his group was marching to Ojota that “the fuel hike is inhuman and wicked. All Nigerians should reject it in its totality.”

Similarly, leader of the Muslim Students Society, Alhaji Quasim Badrudeen, urged President Jonathan to emulate his predecessor, the late President Umaru Yar’Adua who reduced fuel price from N70 to N65 instead of embarking on an arbitrary increase.

Pastor Tunde Bakare of the Save Nigeria Group, SNG, has accused President Goodluck Jonathan of illegal deductions from the Federation Account without recourse to the National Assembly.

Bakare, who has been on the streets with almost a million Nigerians, says this is an impeachable offence.

According to him, it was part of this deduction that was inflated to reach the N1.3 trillion which is now been termed the amount used to subsidise fuel in the last one year.

The General Overseer of the Latter Rain Assembly said Nigerians should ask the President why the amount for subsidy suddenly rose to N1.3 trillion instead of the N300 billion that it has been since 2007.

He said the time has come for all Nigerians to take to the streets and ask for the President’s impeachment.

He said Nigerians no longer have confidence in the Senate and the people should always remember that power belongs to them.

He said he was there with various groups in the Islamic religion to register their support, adding that they have vowed to visit Mecca for his case.

Dr. Olukayode Akinlade, former Secretary of Nigerian Medical Association, said members of the association have decided to join the struggle not because they cannot live with the harsh economic policy, but because the cost of treating the average Nigerian would skyrocket.

According to him, the doctors have realised that with the subsidy removal, cost of health would be 10 times what it is currently.

He said the NMA had stationed ambulances everywhere around the protest ground, adding that they would treat any injured protester free of charge within the period of the protest.

He thanked Nigerians for taking to the streets, urging them to remain resolute.

Lagos lawyer, Festus Keyamo, adding his voice, said Jonathan has no choice than go back to N65 per litre.

He said he heard those in government saying after three days, the protesters would become tired but urged them to remain non-violent as their protest is ringing bells everywhere in the world.

Nollywood actress, Toyin Aimaku, told the crowd that as long as President Jonathan remained stubborn, she would be in the streets with the protesters.

Comedian, Klint Da Drunk, said he has become tired of the Jonathan policy. He said he had presented a wristwatch to Jonathan in Akwa-Ibom State some months ago in order to make him “take his time. But I’m surprised that till now, he has refused to take his time.”

A group of Muslims, who came on stage to pray, led by the Chief Imam of Ojota, invoked the Spirit of God to fight the battle for Nigerians since Jonathan had become recalcitrant.

Today’s protest has become scaring as the number has risen beyond expectation. The entire Ojota is filled to the brim. The bridges linking Ojota are also filled with protesters.

As at the time of filing in this report, many protesters were still trooping to the venue of the protest.

Some of the protesters told P.M. NEWS that the worst any leader could do is to punish the people on the first day of the year.

They said they do not even want the President to remain in the seat of power any more.

Comedian Princess told the crowd that since the President has murdered sleep, he would sleep no more.

Barrister Chris Nwaokobia, while addressing the crowd, said their attendance has shown that Nigerians can be resolute.

Mohammed Fawehinmi told the crowd that the country has reached a stage where the President would kneel down and apologise to the people.

He said the protest has threatened Ngozi-Okonjo-Iweala who is now pushing the blame on the governors. He warned the Attorney-General of the Federation against continued threat to the workers.

Mrs. Ganiat Fawehinmi asked the government to do rethink because the battle is already won.

“Corruption is at the height of governance. I prayed in the midnight, and went through my Bible, in Psalm 108 and 109. Please read it too and when you get to Verse 13, ask God to do what happened there to those in government.

“When you see Babangida, ask him where he kept our $12 billion windfall. When you see Iweala, ask her if this is the way the government of where she came from treat their citizens, if you see Diezani Alison-Madueke, ask her how she got the money to buy a house in Vietnam. God will punish all of them,” she said.

P.M.NEWS correspondents report that the curfew imposed by the state governments in Oyo, Kaduna and Taraba states were effective as residents continued their protests indoors.

Only security men were seen on the streets of Kaduna this morning.

The residents complied with the curfew imposed by the government. There was palpable tension in the state.

The fear in Kaduna State today was that the NLC organised protest might have ignited a more serious agitation of political protest as the people have accused the PDP state government of stealing their mandate from the CPC.

Within a 100-metre distance, there was a security post comprising regular policemen, mobile policemen and civil defence corps.

In Jalingo, the Taraba State capital, the protests kicked off at about 8 a.m. today.

The State Chairman of the NLC, Comrade Jonah Kataphs called on the protesters not to relent until the pump price of petrol was reduced to N65 per litre.

Hospitals rendered skeletal services. Some business outfits opened their shops to customers even as civil society groups moved about mobilising people to join the protest.

For the third day running, business activities were grounded in Kano today. All the markets, roadside shops and other business premises were closed.

A few vehicles were on the roads today. The few vehicles and motorcycles on the streets were forced to display green leaves to show solidarity with the protesters.

Despite harassment by overzealous security agents, the protesters remained adamant. Groups of protesters mostly youths were seen moving around the streets carrying green leaves and placards with anti-Jonathan inscriptions.

Most of them who spoke to P.M.NEWS insisted that they are ready to lay down their lives for the struggle until the unpopular fuel policy was reversed.

There was heavy security presence at strategic locations mostly around government establishments and public properties.

The protest was peaceful in Kano today and there has been no clash between the protesters and security agents as at press time.

In Kwara State, the protest was peaceful this morning. The NLC leaders and protesters this morning assembled at the General Post Office area of Ilorin to offer Muslim and Christian prayers for the late Mustapha Muhideen Opobiyi who was killed during a protest last week.

The state NLC chairman, Comrade Farouk Akanbi said there will be no retreat or surrender until government rescinds its decision on fuel price hike.

The Islamic and Christian clerics offered prayers that God will touch the hearts of Nigerian leaders to ameliorate the suffering of the masses.

There was a total shut down in Orita J4, Ogbere junction, Ita Iwade, Ijebu Mushin in Ogun State, southwest Nigeria. There was no violence but the populace were angry about the removal of fuel subsidy.

In Abuja, apart from a large turn out of protesters, a handful of pro-subsidy removal activist led by a lady also took to the streets.