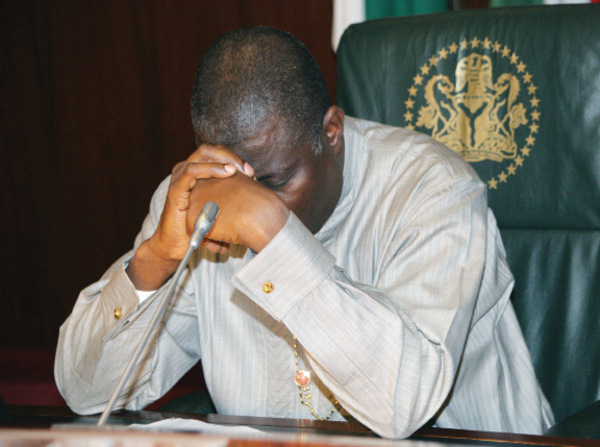 Ayorinde Oluokun/Abuja
There are signs that the embattled Jonathan government, faced with three-days of a paralysing general strike, is softening a little in its response to demands of Nigerians. Although its attorney-general and justice minister, threatened to bring down the full of weight of the law on criminal elements disguised as protesters, his information counterpart revealed government’s softening, when he announced government’s readiness for dialogue. But he quickly added that government would not return to N65 regime.
Labaran Maku, the information minister’s statement may be an indication of government’s preparedness to clutch the window of dialogue that the Senate leadership has provided between it and the labour unions. And it may mean that government is prepared to reduce the cost of fuel at gas stations. Labaran however chided the unions for adding to the pains of Nigerians.
While Maku spoke with reporters today, the attorney general issued a statement.
In his statement, Mohammed Bello Adoke, the Attorney General of the Federation and Minister of Justice, said government has observed that some persons or group of persons are perpetuating criminal activities under the guise of participating in the on-going demonstration against the subsidy removal policy of the Government.
The Government said while it recognizes the rights of Nigerians to peaceful demonstration, it will not allow the ongoing protests to degenerate into anarchy.
Government added in the statement that it has noted that since the demonstration began on Monday, 9th January 2012, some persons have engaged in criminal activities like arson, wanton destruction of lives and property.
The AGF also accused some unnamed individuals of making “unguarded statements bordering on treason with a view to overwhelming the government”, in the course of the protest.
He noted that as a result, several State Governors have imposed curfew in their respective States in order to prevent further breakdown of law and order. “Henceforth, government will not hesitate to bring to bear, the full weight of the law on erring persons or group of persons howsoever called that engage in any act that threatens the peace and stability of the country or its corporate existence”, the AGF said.
“Government reiterates its earlier position that those who have genuine grievances as a result of the implementation of the fuel subsidy removal should express such grievances within the confines of the law and dispute resolution mechanisms as established by law”, he concluded in the statement.
Labaran Maku, the Minister of Information told journalists after meeting of Federal Executive Council that the federal government is now focused on the implementation of programmes contained in the Subsidy Removal and Empowerment Programme, SURE to be implemented with savings from removal of subsidy.
Maku said countries which has borders with Nigeria has all removed subsidy from petroleum products resulting in hike in the price of petrol. He added that reversing the price to N65 in Nigeria will only encourage smuggling of petrol to those countries. The Information Minister also revealed that a separate budget that will capture the projects contained in the SURE documents will be presented to the National Assembly.