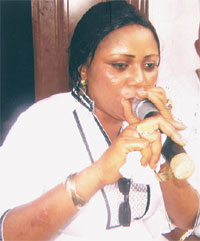 Tentatively titled Fuji Lady, the album is being recorded in digital and analogue format and will be marketed by Merit Promotions.

After the release of the album, the music diva is expected to embark on a music tour of Europe and America before the middle of this year.