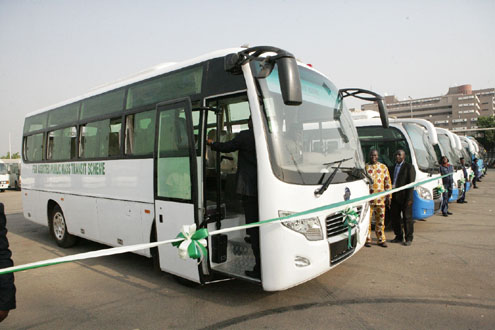 •A cross section of mass transit buses launched by the Federal Government in Abuja, recently.

The convener of the Save Nigeria Group, SNG, Pastor Tunde Bakare has accussed President Goodluck Jonathan of usurping the functions of state and local governments by buying buses to cushion the effects of the removal of the fuel subsidy.

Bakare who disclosed this at a conference held at the SNG office at Ikeja GRA, Lagos, southwest Nigeria, said the general strike and citizens’ action which followed the January 1, 2012 increase in the pump price of petrol, has proved a defining moment in the history of Nigeria and one from which the correct lessons must be learnt.

He explained that such an astronomical and unprecedented hike which was done in a fell swoop was an audacious move that signaled the deep contempt by the government for the Nigerian people.

“Those in authority must have concluded that with the level of poverty inflicted on our people, especially in the last 13 years where poverty has risen in inverse proportion to the growth in revenue, the anguish of spirit has raised a totally docile citizenry who will only dig a hole to escape and continue running when pushed to the wall. “This is the only explanation for the impunity with which all warnings from organized labour and the civil societies were treated by the federal government whose officials were so arrogant and condescending in their public utterances on the issue of subsidy removal.

“It was a shocked people who watched as the regime lampooned the resolutions of the two chambers of the National Assembly on the matter as ‘mere opinions’ forgetting so soon that the ‘doctrine of necessity’ which was invoked by the same National Assembly less than two years ago after Nigerians trooped to the streets against the “power hijack” by the then cabal was never ridiculed,” he said.

Speaking further, the Latter Rain Assembly Pastor said: “Let it be emphasised that it does our democracy no good when the resolutions of the National Assembly are thrashed by the executive as we recently witnessed on the issue of subsidy removal. Neither does it show any appreciation for truth and consistency when the same beneficiary of our civil protests in the dying days of President Yar’Adua’s administration who praised the civil societies eloquently in glowing terms in May 2010, now calls the same people unprinted names.

He said that the SNG was disappointed in the way the leadership of the Nigeria Labour Congress, NLC and the Trade Union Congress, TUC, buckled in the kneels without consulting the group and its allies and without achieving their resolution that reversal to N65 per litre shall be the basis of any negotiation.

“While we outrightly reject the unilateral fixing of pump price at N97 by the federal government upon which the controlling leadership of NLC and TUC threw a spanner in the wheel of people’s movement, it must not be lost on our patriotic people that the clampdown by a government which had arrogantly declared that its decision was final is the proverbial eating of the humble pie.

“So also are the administration’s pledge to investigate the oil subsidy cabal, ensure that the Petroleum Industry Bill, PIB, is passed and cutt the cost of governance. These are issues the regime was not ready to address before the movement of the people. Nigerians must not give up on these issues until logical and conclusive actions are taken on them.

“While the conduct of the controlling leadership of labour at the peak of the movement does not engender much confidence in their fidelity behind closed door, we still enjoin them to bring all negotiations with the Belgore committee to a close within a week and report back to the people who still reserve the right to resume their protests if the negotiators compromise the essence of this popular action,” he said.